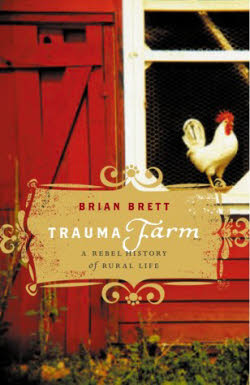 Author’s Note: A free review copy of this book was provided to me by the publisher, Greystone Books. Like all of their titles, the book was printed on acid-free, 100% post-consumer recycled paper without chlorine.

Sometimes, in the best of times, a book and its author will resonate in near-perfect harmony with you, plucking every one of your biological and moral cords. In those moments, when what you hold most dear is somehow both justified and expanded, the power of communication and the centrality of storytelling in human identity reveal themselves.

This was my experience reading Brian Brett’s book Trauma Farm: A Rebel History of Rural Life (affiliate link). The title may lead you to think this is yet another expose of factory farms and the horrible conditions that plague both animals and humans who have to work there. In fact, Brett’s wandering tale is the memoir of his “eighteen-year-long day that includes both the past and the future of living on the land, tracing the path that led hunter-gatherers to the factory farm and globalization” (3).

As such, it is truly a “rebel’s” story, mixing the deep ecological consciousness and respect of a green-hearted environmentalist with the crusty, stubborn traditional mores of a farmer. Brett, a novelist and poet, has raised his family and scores of animals and crops on his farm on Salt Spring Island, tucked into the southwestern corner of British Columbia. Blessed with a temperate climate and fruitful soil, Farmer Brett has acquired immense wisdom and the ability to apply the lessons of nature to an increasingly unnatural world.

Brett recognizes how history is a process and progression, beginning in our earliest dawn as a species, millennia before the first “farm” took shape. It began as hunting and gathering, then settled down into communal farms, and has led to ultra-condensed cities. And over time, the number of small farms has plummeted—from 60 percent of Americans living on small farms in 1900 to only 2-4 percent by the a century later (9)—and we are an increasingly urbanized species. Brett utters his rebel yell to mourn the loss, scorn the looming present, and warn us to the future…while celebrating the beauty of the natural world and the benefits of a modern, globalized civilization.

Farming life as a political statement

At its heart, Brett tells us, Trauma Farm is intended to be more than a home and livelihood, but also a political statement: “to create while leaving only a small footprint. It’s an argument against the modern mythology of agribusiness that believes we can control the gorgeous organic complexity of the planet” (82). While the majority celebrate and reap this new techno-harvest, some, like Brett, are “taking a rebel stand,” preaching the ways of nature and practicing what they preach. Thus, Brett excoriates a generation with “too much science and too little common sense” (282), creating a society that builds factory farms housing 300,000 turkeys in a single building; that dumps 500 million tons of chemical toxins on its soil in North America alone; that breeds “experts” who recommend drinking soda because it is safer than untreated water; that has to then concoct and sell more chemicals in order to wash off these chemicals. It is all one gigantic feedback loop, which is in truth a downward spiral towards some future we can only imagine.

Still, Brett tells of his eighteen-year-long walk on the land of Trauma Farm, joined by many animal and human companions, through fat harvests and lean years, passing by the remains of livestock slaughters and communal feasts on the fruits of his harvests. (Obviously, being a strict vegan, the whole slaughtering thing was one aspect of Brett’s book that I did not resonate with! I could at least appreciate, however, the respect with which he treated his animals, like all animals in nature.)

But Brett reaps the harvest of a globalized world as well (he is irreverent and rebellious on all sides, remember)…recognizing how unsustainable it is all the while: even while he livens up his domestic fare with greens from China and spices from the Middle East, he knows that “we can’t go on forever (291)” like this.

And so he returns again and again to Trauma Farm, the land he walks in his eighteen-year-long-day’s memoir. We walk with him and talk with him, immersing our senses in the natural beauty of a naturally run land. We see the natural procession from birth to death, such as the loss of one of his dogs, Samantha, and how her friend, a border collie named Olive, mourned the loss by walking alone out to the grave and leaving her favorite ball on Samantha’s tombstone (350-51). And throughout, we learn about the joys and sorrows of usufruct, about the wit and wisdom that comes through many hours of hard labor and keen observation. And love…lots and lots of grateful love.

In a time of techno-tyranny, market monopolies, and the comfortable blindness of apathy, some folks just have to rebel. Brett is one of these folks, one of a long but fading tradition of inspired voices who compel us to open our eyes, ears, and hearts. And if you heed the call in Trauma Farm, it will be hard not to feel this inspiration and join Brett in his rebel yell.

Not quite ready for the farming life? Gardening’s a good alternative, and we’ve got a full range of eco gardening supplies — seeds, compost bins, and drip irrigation systems — as well as gardening books to help you get started.