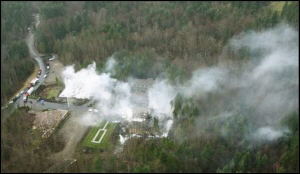 The term “eco-terrorism” is getting thrown around again today after four multi-million dollar “green” homes in a Seattle suburb were torched by arsonists claiming affiliation with the Earth Liberation Front (ELF). Others have argued eloquently that “eco-terrorism” isn’t much more than a political language game: “terrorism” doesn’t describe the aims or methods of the “perpetrators,” but simply creates fearful associations. It’s an easy (and intellectually lazy) way to discredit environmentalism in general, and not worthy of the term “argument.”

With all of that said, though, I have to ask: What the hell do ELF members think they’re accomplishing?

Yes, the “Street of Dreams” homes were large exurban houses… which were built according to a legitimate green building standard. Ideal? No. But greener than traditional McMansion development? Definitely! The potential buyers of homes like these will not be in the market for yurts… ever. Radical acts may feel like a righteous means of “sticking it to the man,” but they also ensure alienation of a sizable portion of the mainstream… and we need these people making greener choices. Greenpeace’s John Passacantando summed it up nicely:

Passacantando believes educating people about the environment is the best tool of persuasion. He says the greats have taught us that love is the force more powerful, so burning down someone’s house for any reason is not going to advance anyone’s cause.

Unless that cause is enhancing one’s revolutionary credentials, and making headlines, of course. I don’t know if this will set back more mainstream environmentalism, or if it will cause some people exploring a greener lifestyle to step back for fear of being perceived as radical. I’m pretty sure, though, that the costs will be much higher than the benefits.