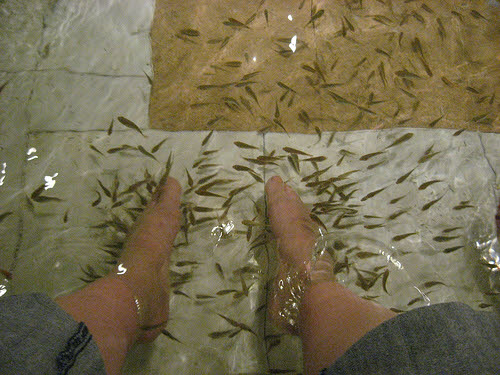 Would you pay to have fish “feed” on the dead skin on your feet for the sake of having soft and well-groomed little tootsies this Summer? If you answered “No,” you’re in agreement with state officials in over 10 states who have banned fish pedicures. But if you answered “Yes,” or “Maybe,” you still have a chance to get this one-of-a-kind and possibly risky beauty treatment in spas and salons near you.

Fish pedicures grew in popularity in the United States in 2008, when salon owners flocked to countries in Northern and Central Middle East – mainly Turkey, Syria, Iraq and Iran – to purchase Garra rufa fish in hopes of offering their clients a unique experience. The half-inch, toothless carp, also known as doctor fish, “feed” on the outer layer of dead skin on your feet and leave the healthy skin feeling soft and refreshed. The fish have been used for centuries in their native lands to treat various skin ailments including psoriasis and eczema.

The Problems with Fish Pedicures

If you are interested in trying out this unconventional skin remedy, there are a few things you should know before scheduling your appointment with the doctor fishes. Public health officials of the U.S. Centers for Disease Control and Prevention are currently investigating outbreaks of diseases, viruses, and bacterial infections detected in the water used to transport the fishes. Salon owners are defending their services stating that disease-causing pathogens can’t survive in their UV-lit, filtered tanks.

While the health risks to most people are considered very low, as reported by United Kingdom’s Health Protection Authority, populations with underlying medical conditions like diabetes, compromised immune systems as a result of HIV, cancer and advanced age, and those with open sores and/or scratches on their feet are at a higher risk and should practice extreme caution.

Fish pedicures also have been banned by some states for the unhygienic practices of using the same fish multiple times with different customers, which increases the risk of spreading infections, and not properly cleaning tubs between sessions. Another reason you also may decide against this skin treatment is it’s a possibility you may get Chinese Chinchin fish in your pedicure water (which is often mistaken as Garra rufa) and have your cute little tootsies bitten.

But if this isn’t enough to deter you from trying this skin remedy, think of the fish… and the environment! Experts from the U.S. Fish and Wildlife Service believe Garra rufa could be a threat to plant and animal life if released into the wild because they are not originally from the United States.

My advice to you is to let the fish swim free in their native ponds and lakes. You can give yourself an inexpensive, au naturale  pedicure without harming anyone or any fish.