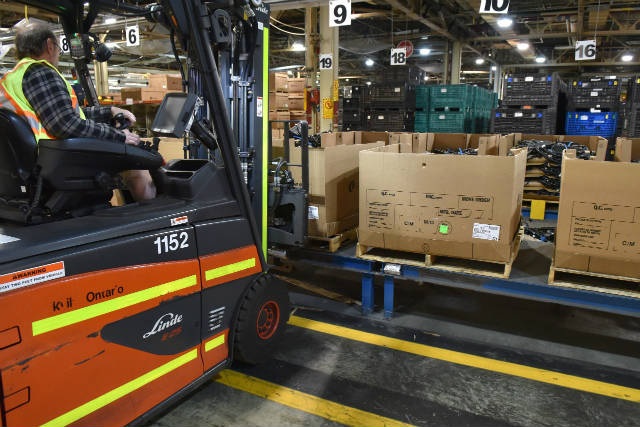 Ever try to eliminate all of your trash at home? I mean all of it – send nothing to the landfill: not a paper towel, an empty packaging box, a disposable diaper? Some people get awfully close, but it’s tough to do when so many of the things in our lives incorporate materials designed for the trash can.  Now imagine you’re trying to accomplish no landfill waste in an industrial setting. Seems impossible, doesn’t it? Some of your materials will come packaged; others will come off of trucks on pallets. Mistakes will happen. Leftover pieces of material will result from shaping and cutting.  And while you certainly could devote some time to figuring out how to recycle or reuse this material, your cheapest option will almost always involve sending this “waste” to the landfill.

While that kind of thinking represented conventional wisdom for generations, some companies recognize that “waste” represents value not captured… or, more literally, throwing money away. Ford is one of those companies, and at their Canadian operations, they’ve reached that seemingly unreachable goal: their Canadian factories send no waste to landfills. Chris DeMorro from sister site Gas 2.o has the details on this accomplishment…

Ford Factories In Canada Are Now All Landfill-Free

Industrial waste has long been a major contributor to local landfills, but Ford is doing its part to reduce its contribution of the global garbage heap. Ford’s Oakville Assembly plant is the latest to achieve zero waste-to-landfill state, meaning that all of Ford’s Canadian factories no longer send anything to the dump.

From 2007 to 2011, Ford reduced its per-vehicle landfill waste by 40%, and by 2016 the Blue Oval hopes to reduced the number a further 40%. It joins the Windsor Engine Plant and Essex Engine Plant, Ford’s two other major factories in Canada, and Oakville becomes Ford’s 21st zero waste-to-landfill factory globally.”Reducing waste is a crucial part of our strategy toward building a world-class manufacturing system,” said Anthony Hoskins, director of manufacturing. “We are leveraging the power of our Ford Production System by applying standard waste reduction processes across our facilities.”

Ford claims that in 2013 alone, the Oakville Assembly plant recycled more than 2,000 metric tons of wood, cardboard, and other refuse that would normally go to a landfill. This saved an estimated 5,000 square-meters of space in said landfills, about the same amount of space needed for the annual refuse of 5,500 average homes. In addition, Ford estimates conservation efforts saved about 32 million gallons of fresh water, a resource that is becoming increasingly important in today’s world. Ford’s committed a lot of resources to bolstering its green image, which includes other recent efforts like Michigan’s largest solar array and installing a “green roof” on its Rouge truck plant.

The Blue Oval is talking the talk and walking the walk on the manufacturing end of things, and their hybrid cars are selling like hotcakes. Now if they’d only show this kind of commitment to the Focus Electric…