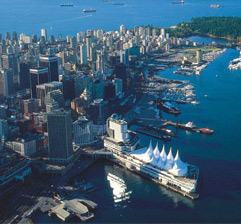 Here’s a thing not often seen in the U.S. – a “First Nation’s” Chief sanctifying an urban conference about the Resiliency of Cities. First of all, we don’t refer to our Native Americans as “First Nations people” and rarely are they offered the honor of sanctifying civic events.

But up in Canada, they do things a bit differently. And so, for the 6th Gaining Ground Summit, this one focused on Resilient Cities, Chief Bill Williams of the Squamish First Nation, on whose tribal land the Vancouver Convention Center was built, led opening ceremonies with a traditional drum chant.[social_buttons]

Gene Miller, Founder of Gainin g Ground, says that a resilient city has 1) a green action plan and 2) a green economic plan.  He sees cities as a productive point of convergence, “In cities, people can talk common sense to each other,” said Miller.

Speakers also included Anita Burke, Founder of the Catalyst Institute whose professional background is Big Oil, i.e. “working for change from within” as she’s quick to clarify; and Majora Carter, a “green Queen” of S. Bronx and a recipient of the MacArthur “Genius” Grant along with about 100 other featured speakers and workshop facilitators.

Gregor Robertson, the 44 yr. old charismatic Mayor of Vancouver and organic farmer [his company is called ‘Happy Planet,’ if that lends any insight…] has thrown his hat into the ring to claim Vancouver the Greenest of the Green cities.  “This is a friendly competition,” he says.

Robertson’s youthful exuberance was on display when he urged the 600 delegates of the Gaining Ground Summit to “ramp up your efforts as aggressively as you can…The stakes have never been higher for us and for future generations to come.”

Rob Abbott, who, as the conference Moderator introduced Mayor Robertson by the very proper, if archaic, “His Majesty,” commented that “Sustainability is not a problem to be solved but a future to be created.”  Robertson said he’d rather not be addressed as “His Majesty.”

Robertson’s action plan for 2020 must now be “tabled” (transl. = passed) by the Council in order for it to be officially adopted.  His administration is also helping oversee the implementation of the Greenest Olympics in history.  Environmental consultant Tim Reeve of Reeve Consulting points out that it is one thing to set the guidelines that all official Olympic 2009 apparel, for example, meet the no-sweatshop standard and then a whole other ballgame when it comes to implementing policy.

It’s quite possible like that Vancouver might nab the Emerald City title when even people like Paul Hawken, keynote Summit speaker, admits that he and his fellow Californians “idolize” Vancouver as a “touchstone” of urban green planning.

Hawken dropped gems like, “Our fate as human beings depends on cities. We are nothing without each other.”  He took a bit of a stick to the media saying that, “The trivialization of the environment is still occurring in so many places in the media.”

He quoted several times from Herman Daly, pointing out that we are underutilizing our most plentiful resource – people.  “We are using more of what we have less of to use less of what we have more of – human beings.”

And in yet another address, where forming thoughts fired off synapses as Hawken spoke, this inspirational environmentalist and entrepreneur left us savoring, “The city gives us an extraordinary way to re-imagine what it is to be a human being.”

Gaining Ground B.C. ’09 tied Portland in with Vancouver in a strong way.  There’s this popular notion of Cascadia that is being volleyed about.  Cascadia is the term used for the bio-region that extends from Metro Vancouver down to Portland. Cascadia, the bio-region, mitigates the division of sovereign state borders and sees the harmony and interdependence of a region and its resources.

Portland delegates made a big showing, including Mayor Sam Adams and Nike’s Director of Sustainability, Sarah Severn, who is headquartered in the U.S.’s most livable city, Portland – a city which also boasts a dearth of job opportunities for its ever-increasing inhabitants.

California might have been invited to the party.  When asked, Miller responded he hadn’t thought of it. California may be outside the bio-regional zone of Cascadia but many of its cities have shown extraordinary resiliency.

Cam Brewer, Executive Director of SmartGrowth B.C. reinforced that, “Cities are for human beings with human values.”  He alighted on the deceptively simple feature of a city’s “walkability factor.”

“If a city has a walkability factor, surprise, surprise…people will walk.  When people walk, they are healthier. How can we bemoan escalating costs of health care while simultaneously spending billions on freeway and road infrastructure?” asked Brewer.

Hawken similarly noted how absurd it is for oil producing nations to assume they deserve reimbursement for loss of revenue, “attributable” to use of alternative energy sources.  “That’s like a typewriter company asking Intel to reimburse them for loss of market share.”

Hawken called on our common intellectual ancestor, Thoreau, and referenced his Master Work, Civil Disobedience. He summed up the work as “Standing for the truth, no matter how unpopular it is.”

B.C. former Premier, Mike Harcourt was down with this sentiment.  He took the podium during the Summit and related how, in his more youthful days, he was known as “Ho Chi Harcourt,” in part do to his mustache he sported at the time but mostly from his reputation as a young lawyer defending draft dodgers and refugee immigrants.

Harcourt also said that for Vancouver to be the “greenest” city, you have to get political. “Move ideas to action.”