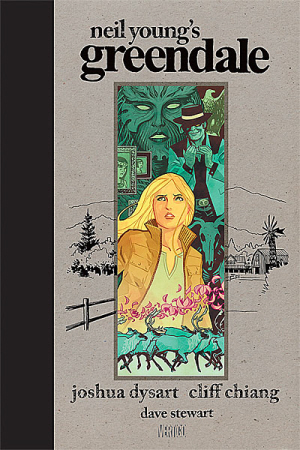 Iconic rocker Neil Young wasted no time in crafting a response to the launch of the war in Iraq, and the larger political and cultural forces he saw motivating it: the concept album Greendale came out in August, 2003, a mere six months after the first attacks were launched. Since then, Young has recrafted the story of Sun Green and her family into a live rock opera,  a film (which he directed under the pseudonym Bernard Shakey), and, of course, a website (though, as you might expect, not the usual promotional site).

On Wednesday, June 9th, Greendale saw yet another incarnation: the graphic novel Neil Young’s Greendale (affiliate link) hit comic book stores, and goes into broader book store release today. Created by writer Joshua Dysart and artist Cliff Chiang, the book combines a faithful rendering of Young’s story with the conventions of the graphic novel to create a vivid, moving, and even disturbing work.

The graphic novel medium provides an apt canvas to highlight the “hero’s journey” motif present in the story. Sun Green isn’t just a young woman who comes into her own as an environmental and political activist: she’s the offspring of a line of women who’ve chosen unconventional life paths in response to economic and political developments founded on exploitation of people and natural resources. She’s haunted by dreams of her ancestors, both living and dead, and also stalked by a shadowy, unnamed character who’s represents “business as usual” (and who, ironically, bears a striking resemblance to Young in the novel). She must choose whether to accept her heritage, or to slowly break down while attempting to pursue a “normal” life in Greendale.

Read more of my review of Neil Young’s Greendale at the Sundance Channel’s SUNfiltered blog.