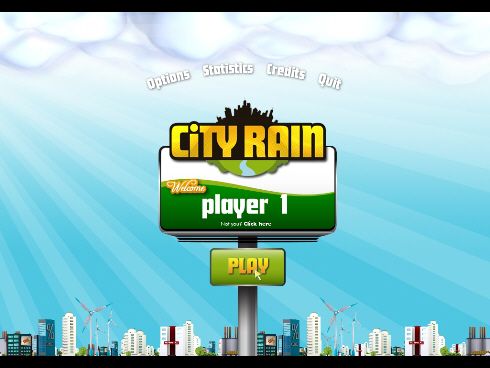 After a long holiday weekend, you may shudder a bit at the idea of a new video game… “I can’t get the kids out of the house as it is!” Canadian company Ovolo’s new game City Rain, however, may be one you don’t mind the kids playing… or you might even get hooked on yourself. Part role playing, part puzzle solving, part community building, City Rain brings urban sustainability issues into the realm of strategy gaming.

City Rain places you in the role of environmental planner and enforcer:

…you play as a member of an elite environmental Swat Force in charge of restructuring cities, before they are penalized by the World Environment Protection agency… As a member of the Rescue And Intervention Non-profit (RAIN) organization, your job is simple. You must rescue cities on the WEPA blacklist before they are punished by the world for being destructive to our irreplaceable natural resources. Ultimately, you must help reorganize cities so that they will become environmentally friendly and inspiring places to live.

Play occurs on a grid surface on which you place homes, schools, community services, factories, green spaces, landfills… all of the elements of a contemporary built environment. You objective: construct and/or reconfigure your city to maximize sustainability, economic opportunity, leisure, safety… all of the things that make city life worth living.

My experience with City Rain

As I’ve mentioned before, I’m not a gamer… so, even after playing several times, I’m still figuring a lot of it out. As a result, I haven’t been real successful… my missions have all been aborted.

If you like to get into a game by playing, failing, and learning from that failure, you may like City Rain. Instructions are relatively minimal. I found that a little frustrating myself… but, again, I’m not really a gamer.

If you’re a big fan of the latest Xbox or Playstation games, you may find City Rain a bit low-tech: not a lot of fancy graphics or movements, and a real simple soundtrack. A hardcore gamer may immediately react with something along the lines of “This is so ten years ago…”

Despite these elements, though, I can see how you might get hooked on this one. There’s definitely strategy involved, and you have to be able to think quickly. Your choices are somewhat limited with each play, so you have to decide fast what you’ll place, and where you place it. Everything, of course, affects your scores on the elements above, so place too many factories, and you may get a high job score, but wash out on sustainability and leisure. I’m already thinking about what I’ll do differently next time…

One of the definite pluses of City Rain: it’s cheap. The game costs $9.95, and you can even try out a free demo version before plunking down your money. As a member of 1% for the Planet, Ovolo commits at least 1% of its annual revenue to environmental causes… so you can feel good about spending that ten bucks. It’s available for your PC or Xbox via the Xbox Live Marketplace ‘Indie Games’ site.

Have you played City Rain? What did you think? Would especially love to hear from regular gamers.