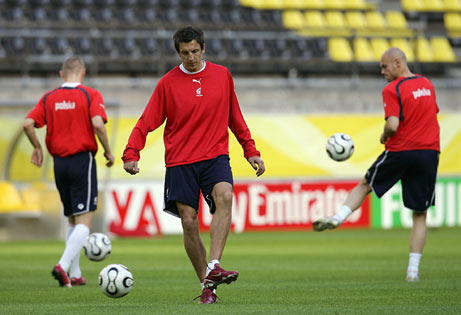 In February, I took note of the green features at Detroit’s Ford Field, the site of this year’s Super Bowl XL. This year’s World Cup, which many of our non-American readers will claim is the real championship of (real) football, is also making efforts to offset its environmental impact. This is more difficult, as teams are playing in twelve different arenas around host country Germany, and FIFA, the world governing body of soccer, has no environmental policy. Still, organizers of the event are taking a number of steps to minimize carbon dioxide emissions, waste disposal and resource use:

From promoting public transportation to using rainwater to water the soccer fields, they hope to offset the environmental damage caused by millions of visiting soccer fans.

“We are confident that this will be the greenest World Cup ever,” said Thomas Hackbarth, a spokesperson for the games. …

The transportation, construction, and maintenance of the 12 World Cup stadiums, as well as the presence of 3.2 million spectators, are expected to generate more than 110,000 tons (100,000 metric tons) of carbon dioxide and other heat-trapping greenhouse gases. …

Cup organizers aim to offset all carbon dioxide emissions by financing climate projects, including the planting of forests in far-away places such as India and South Africa. Forests soak up carbon as they grow.

“We aim to neutralize all effects of World Cup travel, the construction of the stadiums, and the hotel overnights, including [the] heating of water,” Hackbarth said.

Several of the stadiums have built rainwater harvesting systems for field maintenance, game tickets serve as public transportation passes, and some locations have resurfaced parking lots with a combination of lattice mats (made from recycled plastics), soil and sand. Additionally, all energy used by the games is being generated from renewable sources. The World Cup is using the Olympics as its model for sustainable sporting events, and while organizers admit the games will be far from perfectly green, they’re taking a wide range of concrete measures that will hopefully provide a model (and a standard to exceed) for future soccer championships.