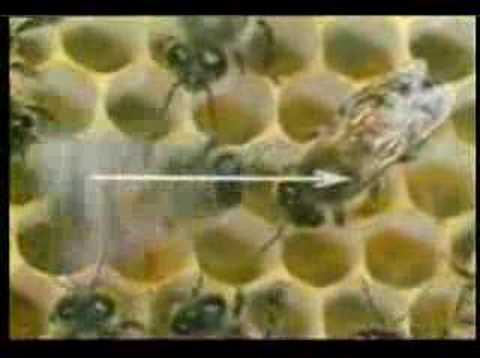 By doping honey bees with cocaine, researchers at the University of Illinois have discovered evidence that the insect brain has a reward system.

The famous “waggle” dance of honey bees is a complex language that allows foraging bees to communicate the distance, direction and quality of a food source to the rest of the hive. The study showed that honey bees on cocaine tend to dance more, without relation to the quality of food or state of the hive. Given the effects of cocaine on people, hyperactivity may seem like a fairly obvious reaction. However, the implications of the study suggest something that has not been found before: a reward system in the insect brain. In previous studies, entomology and neuroscience professor Gene Robinson, who led the study on cocaine in bees, gave octopamine, a behaviour-altering chemical, to both social honey bees and solitary insects. The solitary insects responded by eating more. The bees ate less and danced more. That supported the conclusion that the waggle dance was an illustration of altruism in the insect world.

“The idea behind that study was that maybe this mechanism that structures selfish behavior–eating–was co-opted during social evolution to structure social behavior–that is, altruistic behavior,” said Robinson. “So if you’re selfish and you’re jacked up on octopamine, you eat more, but if you’re altruistic you don’t eat more but you tell others about it so they can also eat.”

To test whether this altruistic behavior was hardwired to a reward system in the insect’s brains, Robinson and his colleagues gave the honey bees cocaine. They chose cocaine for two reasons. Firstly, the drug inhibits octopamine transit in insect brains. Secondly, cocaine has well documented effects on the reward system of mammal brains by influencing the levels of dopamine in the brain. Dopamine is important in controlling many brain functions, including feelings of motivation and reward.

Robinson was aware of studies like the one by neuroscientists at the National Institutes of Health that had linked human altruism to our brain’s reward system. In humans, the same primitive area of the brain stimulated by food or sex is also stimulated by acts of altruism.

The University of Illinois study therefore drew a connection with the insect brain and inferred that bees on cocaine dance more because of the altruistic high it gives them.

To be certain that the dancing wasn’t simply an expression of unstructured hyperactivity, the research team demonstrated that only the foraging honey bees dance on cocaine, that these bees don’t move more than other bees except during the dance and that the dances of addled bees still accurately depict the location of food.

“It’s not like they’re gyrating wildly on the dance floor out of control,” said Robinson. “This is a patterned response. It gives distance information, location information. That information is intact.”

Source: University of Illinois at Urbana-Champaign via EurekAlert!