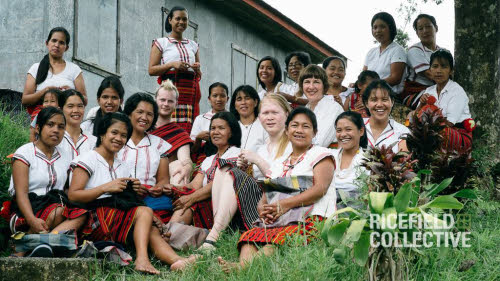 As many readers know, it can be difficult to combine our values into one venture. How can we create businesses that serve the broader communities and ecosystems that they function in, while also paying everyone involved a fair wage?

Many of us have heard stories about larger companies that meet these metrics like Seventh Generation or TOMS Shoes and Eyewear, but we thought readers might also benefit from lessons from a much smaller, more personal project.

Below are takeaways that our friend Meredith Ramirez Talusan gained as the co-founder of the Ricefield Collective, a Kickstarter project dedicated to generating supplemental income for women farmers in the Philippines through helping them produce and distribute beautiful handmade knit goods from sustainably-sourced organic wool.

1. Plastic can be good.
We thought we should always use biodegradable materials, but given how much people reuse and fix everything, and how deforestation is a big problem in the area, using plastic chairs actually made sense.

2. We find routine work kind of boring, but our knitters find it enjoyable.
We assumed that repetitive tasks such as spending days and days doing nothing but rolling skeins of yarn into balls would be boring, but our women who spent years and years farming by hand actually enjoyed and even coveted such jobs.

3. Our knitters grew to understand larger parts of our business through dialogue.
Though there were parts of the business that were hard to explain, such as the whole concept of Kickstarter in the first place, there were key ideas that we were able to convey. As we transitioned from us leading the meetings to the knitters themselves, it was fascinating to hear them talk about the project in their own words. My favorite quote is from our customer service manager Nieves: “These products are not for the street corner. They are for the world.”

4. Our knitters work faster when we’re not there.
A problem that we were warned about is that workers can get complacent without outside supervision, but in our case, our knitters actually worked faster after we left. Maybe it was because they had already learned the patterns and could knit them faster, but we also suspect that they’re able to rally more as a communal group when they can fully converse and interact in their own language.

5. Our knitters love the idea of our products going to many countries.
One of the great things about being backed by Kickstarter is that our products end up all over the place–Australia, Japan, Russia, and pretty much all over Europe. Our knitters are thrilled with this idea, and often talked about how even though they didn’t have the means to travel, there was something wonderful about their craft being able to travel the world on their behalf.

6. Concepts like living wage get complicated.
We found ourselves wrestling with what a living wage actually meant, in a place where people can generally live off their land, but are unable to buy much of anything else without supplemental income. Should we begrudge the ones who leave because they don’t feel like they should send their kids to school or have electricity? It’s clear to us that it’s not just about the money people make, but also a perception that what they’re doing is worthwhile and that they have enough money to perceive their lives as improving.

7. It’s one thing to Kickstart something, quite another to keep it going.
We did extensive interviews with the women, and one after the other said that their biggest wish is for Ricefield Collective to keep going. They’ve experienced so much instability and uncertainty in their lives that almost all of them yearn for something permanent.

8. They love hearing stories about our lives.
Everything from washing machines to tall buildings, food delivery to constant Internet, our knitters took working close together as a great opportunity to glean what it’s like to live in the West. It was also a good way for us to emphasize what they already suspect, that though American movies tend to feature people with lavish lifestyles, day to day life is not so glamorous, and certainly wouldn’t be if they were to answer the call of recruiters who try to get them to apply for jobs as domestic workers elsewhere.

9. Most of our knitters don’t have electricity.
Somehow, because Jean, our manager, lived next to the road that was part of the grid, it took us a while to absorb the fact that a majority of the people in the village live far from the road, and therefore had no electricity.

10. Many of our knitters’ husbands worked elsewhere.
About half of our knitters had husbands who worked in other provinces as laborers and miners. So they expect themselves to take care of their children with help from relatives, do farm labor, and also knit for us. A consistent reason why they want their income from Ricefield to be stable and guaranteed is so that their husbands can spend more time at home.

11. Despite their poverty, our knitters pride themselves on being honest.
They differentiate themselves from people in the city by clinging to a policy of honesty. In at least three cases, we accidentally overpaid one of them and they returned the money without question. My favorite reaction was Dackmay’s, who held up an extra thousand peso bill that accidentally got stuck to her week’s pay (worth about three days of work) and asked, “You want to give me a bonus ma’am?”

12. Our knitters have an internal notion of what’s fair.
Even as they asked for more money when a pattern was difficult or particularly long, they also openly expressed it when they thought that we were paying them too much. They also resisted having someone cook lunch for us as a group, though they eventually acclimated to the idea. However, they did insist on bringing their own rice from home.

13. They want to be paid by the piece.
They prefer their pay to be commensurate with their production even though we wanted to guarantee them a minimum wage. We ended up calibrating our pay structure so that even the slowest knitter can at least earn the same as what she would make if someone were to hire her to help in the fields.

14. They hate waste.
They use the paper packaging from our yarn to write notes on, and even tiny pieces of thread end up being incorporated into finger puppets for our customers or their own children.

15. They love chocolate!
Every time we come back, that’s what they ask us to bring.

Currently, the Ricefield Collective has a pre-sale going on for their Fall collection, and continues to do great work in the Philippines. They hope to grow to provide sustainable income for an ever larger number of subsistence women farmers, helping them earn enough supplemental income to continue their traditional rice farming in the beautiful terraced mountains.

Meredith Ramirez Talusan is the Director of Ricefield Collective, a social enterprise she co-founded along with her art school friend Anna Maltz to combine their mutual interests in craft and social justice. She grew up in the Philippines and is currently on leave from the comparative literature program at Cornell, after getting a visual art MFA from the California College of the Arts.