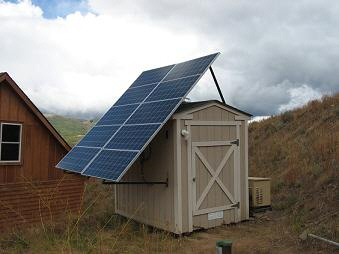 I get a lot of people that ask me ‘What’s it like to live off the grid?’  I think a lot of people picture us huddled around a candle in darkened cabin in the middle of the woods.  Well for the first couple weeks we moved into our home, that’s exactly what it was like!  But we’ll get to that.

Off Grid or Off Our Rocker?

A few years back, we grew tired of the city and noise and hassle that came with it.  We decided that the life we wanted was in the mountains.  We fell in love with an area that had phenomenal views, a lake nearby, and  was close to a skiing community.  One problem: no power.  Not only was there no power, but there was no water, sewer, or <GASP> high speed internet.  In fact the only real utility that existed was phone lines, and those are soooo 1996, right?

But there were other houses in the neighborhood running on solar kits and small wind generators and we naively thought ‘How hard could it be?’.  With the help of friends, family, and a builder that had built in the neighborhood, we felt we had the perfect house for us.  We are not rich folks by any means, but we felt we had a comfortable home that we could grow into a little.  We had 16 batteries, 1300 watts of solar, 300 sunny Colorado days per year, and a propane generator backup.  This would be easy right?  Just wash the clothes on sunny days!  Piece of cake.

Oh, You Mean We Need Sunshine?

We chose to move into our home in the winter that our little hamlet would break the record for snowfall in one year.  We figured out in a hurry that our panels didn’t run on snowflakes.  Go figure.  We had 3 solid months of snow, 6-12 inches EVERY DAY.  Even the toothless old timers with the long beards had never seen anything like it.

And worse, our builder had suggested a forced air electric furnace for our modular home to save money.  Big mistake.  Since there was no sunshine, and since we decided we like the pigment of our skin to be decidedly un-blue, we were running off the generator. When it wasn’t breaking down, freezing up, or getting overcome with snow, it was burning through $1800 worth of propane per month.  Did I mention we’re not wealthy people?

The worst part was that when we ran out of propane, which was about every 15 days, the propane truck couldn’t get to us.  Being isolated and at the end of the road, which seemed so attractive just a few months ago, the snowplows couldn’t get to us until late afternoon.  And as soon as they did plow, we’d promptly get 12 more inches of snow, sealing off our isolated little home from the propane man.

So this is the part of our life where we got used to setting the thermostat to 50 degrees, warming up by shoveling endless amounts of snow, and sleeping under enough blankets to cover a jumbo jet.  Good times.  And actually, they were good times.  My wife and I grew closer, learned a ton about our new home, and became conscious of every watt that flowed out of the system.

We learned that EVERYTHING needed to be on power strips.  Even the garage door openers.  When the sun did shine, we learned to milk every drop of heat from it to help heat the home by opening shades.  And when there was no sun we shut the blinds tight and hunkered down.  We opened and closed the shades so often the neighbors probably thought we were sending Morse code.  If we had known Morse code we would have said ‘Bring soup!’.

We learned that since we had a well pump drawing power out of our system, that wasting water meant wasting power (yellow is defintely mellow at the Bergethon home).  We eventually got a wood burning stove and took advantage of the acres of already-dead trees not far from our home.  We learned that there is a major difference in power used in different light bulbs.  And we learned that we really didn’t need to watch as much TV as we thought.

Finally: Bliss while Living off the Grid

So, with some painful lessons, a little cash, and a lot of patience, we live very comfortably now.  We consume approximately 200 kw-hrs per month of electricity, compared to the typical American household that uses more than 1,000.  We use about 500 gallons of water per month, whereas some families use that in a day.  I don’t say these things to brag or toot my own horn, I say these things as a reformed waster that is trying to help others change their habits and become conscious of their energy consumption.  And the best part is I get to help people do just that every day! And hopefully this industry, this blog, and the people that read it can spread the word.  I look forward to sharing my experience and learning from yours.  Thanks for reading.  In the coming issues we will discuss the lessons we’ve learned and how they might apply to you, whether you’re off grid or not.

Kriss Bergethon is a writer and solar professional from Colorado.  He lives off grid with his wife and two dogs.  For more information visit his site at Solar Kits.

Not quite ready to go off the grid? Start simple with a solar cooker.