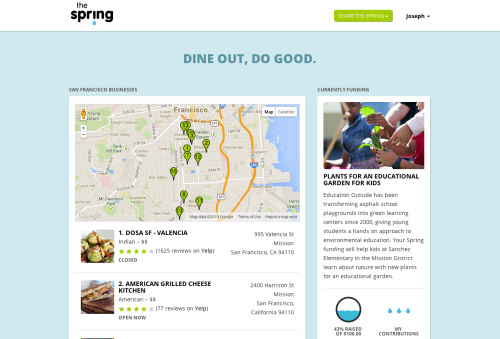 Remember Carrotmob, the company that offered a “carrot” (specifically, a “mob” of customers at an assigned time) to small businesses for investing in social or environmental good? I haven’t heard much about them since their first fully virtual effort at “buycotting” (or “carrotmobbing,” if you prefer… or just plain ol’ “crowdfunding”) just over a year ago, and was hoping they hadn’t succumbed to a still struggling economy. Not only are they still around, but they’re experimenting with a new approach to bringing together socially-concerned consumers with the businesses that share their values: a “loyalty app.”

The Spring – which just went live in the last few hours – not only directs diners to restaurants they’ll like, but that also have committed to supporting projects for social good. Once you connect your credit card to The Spring iPhone app, every purchase you make at a participating restaurant will generate a donation to a good project, as well as a cash reward for you (each is 3% of the bill). That’s it – if you’re card’s connected, everything else is automatic. 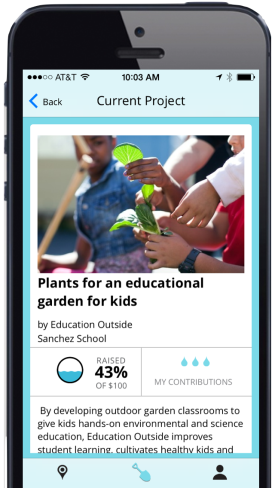 Just as Carrotmob focused on the idea that many people prefer to reward good behavior rather than punish bad, The Spring stems from a notion of loyalty that isn’t primarily economic. “Loyalty is an emotional concept,” said Brent Schulkin, CEO of The Spring. “We are focused on telling stories about how businesses are supporting great local projects. This is designed to foster a real emotional connection between customers and businesses. We believe this will do a much better job of driving long-term loyalty than discounts, and yet no one else in the market is focused on doing this in a way that is easy for businesses.”

As with Carrotmob, the early versions of The Spring are limited to the San Francisco area… though I have no doubt that both restaurant owners and customers in other parts of the country will start asking for it. It also appears to be an iPhone-only opportunity at this point – no word about versions for Android.

If you give The Spring a try, make sure to stop back by and tell us about your experience with it… I’d love to hear more about the experience of using such an app.

Images courtesy of The Spring