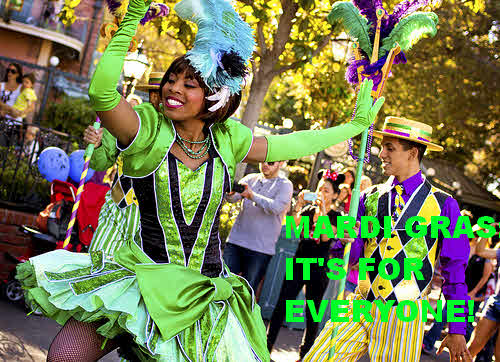 Today, as on every Mardi Gras Day, New Orleans is in the midst of full-on mayhem. Depending on when on Fat Tuesday you are reading this, the Zulu and Rex parades are either lining up at their staging sites or rolling down the streets amongst crazed revelers. Mardi Gras Indian tribes in their feather-and-bead suits have been out since dawn, chanting and singing between their stops at neighborhood bars. The skeleton gangs in the Tremé and other neighborhoods, the anarchic foot parades in the Bywater and elsewhere, the breast-barers and the scantily clad gender-benders in the French Quarter… All are part of the wild mix.

One feature of recent Mardi Gras celebrations is missing this year, however. Thanks to a city council vote on January 23, the growing trend of taking over swaths of sidewalks and neutral grounds (as we New Orleanians call medians) is a thing of the past. The long walls of chairs and ladders at the very front of curbs that impeded visibility and mobility, and the roped-off areas that effectively privatized city grounds, are now illegal. So is anything else that cordons off big chunks of space from the public domain, including personal port-o-potties.

“With the new rules, it’s like a different place,” said Uptown resident Tamarin Hennebury. “There’s more ability to stroll right up to the parade, see it well, and catch beads. You don’t have to face territorial battles and get the evil eye, like, ‘You’re in my space. Can’t you see my ladder? Don’t cross that line.’”

The city council resolution was a vote in favor of the commons. That is the set of public spaces, popular culture, natural resources, basic services, and other riches of life and society that are, or should be, enjoyed by all people and cherished for the planet’s well-being. The commons is the fundamental idea that life, information, human relationships, cultural traditions, and nature are sacrosanct and not for sale or appropriation. Another way to conceive of this is how it is characterized in Spanish: el bien común, the common good.

A short list of parts of the commons in the U.S. includes: Social Security; Medicare; libraries; national forests; city bus, subway, and highway systems; the Internet; public schools and state universities; town parks and playgrounds; sidewalks; and mail delivery. Many may take these for granted but in fact, a lot of these resources and services became public through hard-won fights, and another fight is needed to save the U.S. Postal Service.

All over the world, pieces of the commons are being commodified and/or privatized by the powerful and rich, via government law and unfair trade accords. The market is overtaking the world like that voracious yellow Pac-Man, eating everything in its path. A very limited list of what can now be bought and sold includes the creation of babies, indigenous knowledge (so-called intellectual property), public radio and television, schools, human organs, genetic mapping, the use of plants and animals, water, and air. (Yes, air. Carbon trading is, effectively, the buying and selling of air).

New Orleanians who were hard-hit by the flood of 2005 following Hurricane Katrina can no longer take any public services for granted. The city has been a national model for privatization. One of the first acts of the municipal government after the flood was to fire almost every public school employee, from janitor to headmaster. The father of neoliberalism, Milton Friedman, came out of retirement a few months after the flood to address the public school system, with its overwhelmingly African-American teachers and student body. He wrote in The Wall Street Journal, “This is a tragedy. It is also an opportunity to radically reform the educational system.” Today, fewer than five public schools remain. Moreover, at a time of record-breaking homelessness in the wake of such grand-scale property destruction, the government took the opportunity to raze most public housing projects, even though few of the brick buildings were structurally damaged. And as for public health, the last in the troika of essential services: forget that, too. Shortly after Katrina, the government ordered shut the city’s one public hospital, Charity, though its buildings, too, were little harmed.

A second level of threat is that of community traditions. New Orleans has always been guided by the two sisters of the commons: gifting and solidarity. On offer to one and all has been a vast repertoire of public-domain music, street revelry, dance steps dating back to Africa before the mass kidnappings, conversations with neighbors and strangers, the sharing of spicy Creole food (including free meals in many bars in African-American neighborhoods), and a we’re-all-in-this-together conviction.

One challenge to these traditions has come from the ongoing exodus of 100,000 people – mainly Black people, whose ancestors spawned many of the traditions. Other threats include the arrival of more and more newcomers with little understanding of the culture, modernization, and gentrification. These same elements are destabilizing gift economies, solidarity, and the commons in many places around the planet.

This was all on display on a not-so-long-ago night at the Blue Nile, a club on Frenchman St. As Kermit Ruffins wailed on his trumpet, a woman began screeching furiously. “I was here first! You saw me here. And you moved right in front of me!” On and on she went, louder than the entire band.

Not one to intervene in public altercations unless someone is in danger, I couldn’t resist this. Never once, in my decades of frequenting this city’s music-filled dives, had I heard anyone try to claim as her or his own a square of barroom floor. Certainly not at the funky Blue Nile, nor in its previous incarnation as the even funkier Dream Palace.

I told the screaming tourist behind me to hush, that we don’t act that way here. Then I invited the shaken woman who was being aggressed to come stand in front of me.

The same attempted privatization of space has arisen quickly at the Jazz and Heritage Festival in recent times. Each year, one has to navigate around an ever-larger acreage of supersized lawn chairs and blankets spread across what is intended to be communal viewing and dancing territory.

Naturally, people aren’t just accepting this passively. They are inventing ways to ensure that society’s and nature’s wealth remains for the use of the community and for the sustenance of the earth. While much more remains to be done, citizens – sometimes joined by sympathetic government – have won important victories. For some examples, see www. otherworldsarepossible.org and www.onthecommons.org.

For now, despite the hyper-privatization of government services in the Big Easy, community still remains more important to most of us than commodity.

In the spirit of Southern hospitality, we invite you to come celebrate this fact. Revel in the parts of the culture that have not been claimed or sold in a for-profit or it’s-mine mentality. And we’ll happily share the dance floor with you.

Beverly Bell has worked for more than three decades as an advocate, organizer and writer in collaboration with social movements in Latin America, the Caribbean, Africa, and the US. Her focus areas are just economies, democratic participation and gender justice. Beverly currently serves as associate fellow at the Institute for Policy Studies and coordinator of Other Worlds. She is author of “Walking on Fire: Haitian Women Stories of Survival and Resistance” and of “Fault Lines: Views Across Haiti’s Divide.”

Copyleft Other Worlds. You may reprint this article in whole or in part.  Please credit any text or original research you use to Beverly Bell, Other Worlds.