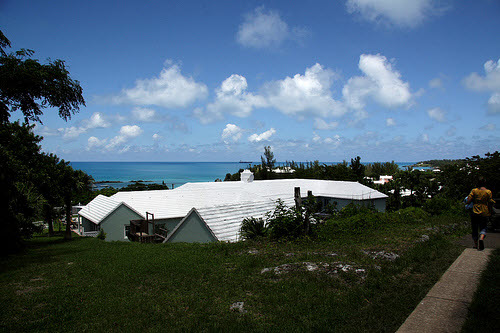 Study: If we painted every rooftop in 100 major cities white, it would offset the entire planet’s carbon dioxide emissions for one year. That’s nearly 44 metric gigatons.

It makes sense. We all know white reflects heat (that’s why we wear white shirts and dresses on hot days), and we even knew that painting rooftops white lessens the need for air conditioning. But until now, we didn’t know that changing dark–colored surfaces to white would help fight against global warming.

The news broke yesterday at California’s Climate Change Research Conference. Hashem Akbari, attending the conference from the Lawrence Berkeley National Laboratory, announced that replacing dark shingles on an average-sized household rooftop with a lighter color would offset 10 metric tons of carbon dioxide—comparable to taking two mid-sized cars off the road for a year.

Speaking of roadways, they’re part of the problem too. Because of its cheap nature, most roads are paved with black asphalt instead of light grey concrete, which causes roads to absorb an inordinate amount of heat. Repaving roads with lighter-colored materials would have a similar impact to painting rooftops.

California already mandates that newly-built large buildings have light-colored rooftops, but the law was intended to decrease air conditioning costs. Akbari hopes to enlist the United Nations in an effort to convince major cities to make their roadways and rooftops more pale.

Read a full summary of the report here.