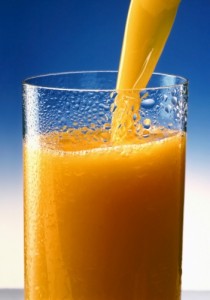 PepsiCo, owner of the Tropicana brand, has announced the green-quotient it figures accompanies the production of a meager half-gallon carton of orange juice: 3.75 pounds of carbon dioxide. Most of that stems from the emissions of just growing the oranges, which tend to include sizeable doses of nitrogen fertilizer.

What now? Pepsi isn’t sure. According to a report today in the New York Times:

(PepsiCo) figured that as public concern grows about the fate of the planet, companies will find themselves under pressure to perform such calculations. Orange juice seemed like a good case study.

The company has not yet made any decisions for where all to use the information, such as if to put it on packaging or not, but says it will provide it openly on Tropicana’s Web site.

PepsiCo has pledged to be a leader among corporations seeking “carbon neutral” operations, and to provide consumers with an absolute number for their products’ carbon footprints.

PepsiCo is scheduled to announce its Tropicana results on (today), and will publish carbon-footprint numbers for products including Pepsi, Diet Pepsi and Gatorade. Said Bryan Lembke, a PepsiCo manager on the project: “If you don’t measure it, you can’t improve it.”