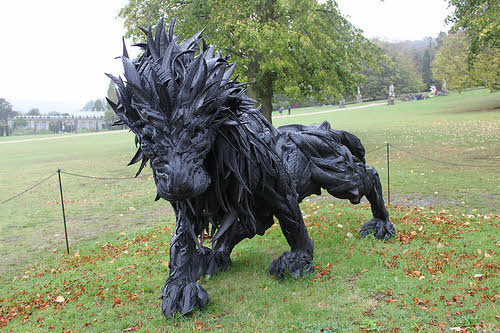 There are approximately 290 million scrap tires generated each year in the U.S., with about 27 million of those disposed of in landfills, notes the EPA. Fortunately, the majority of scrap tires are recycled or used in beneficial ways, such as for fuel, building projects and rubber-modified asphalt.

The not-so-good news is that even with current efforts to reuse and recycle scrapped tires, there are still nearly 10 percent that end up in landfills. These millions of tires pile up and cause problems due to uneven settlement, which can harm landfill covers.

As landfill space is becoming increasingly scarce, these non-biodegrade tires are becoming a big environmental concern. They are also driving down home values due to illegal dumping. Tires are also a breeding ground for mosquitoes that can spread West Nile Virus. There is also the possibility of tire fires, which produces acidic smoke harmful to humans and the environment.

Car rental agency Hertz announced last year it signed an agreement with the largest recycler in order to recover materials from an estimated 170,000 worn-out tires its fleet goes through every year, Forbes reports. Hopefully other companies will follow suit.

When it comes time for you to purchase new tires, it’s also important to research options to recycle your old tires. Taking time to research sites such as TireBuyer to locate the best deals currently available can also help save some hard earned cash.

In addition to major corporations, a number of talented individuals have been making a positive impact in the number of tires that end up in landfills by using them to create stunning works of art, as well as useful items.

Artist/craftsman team Joe and Lauri Hall began making and selling unique items made with old tires before “going green” became a popular trend. They started back in the 1980s with some smaller projects, expanding over the years to selling their recycled tire art across the Southeast region of the U.S.

The Florida-based couple produces hammocks, chair swings, bird feeders, bird baths, planters, and more. Their planters use bright colors and are made into fun shapes such as roosters, pink flamingos, parrots, and tulips. They even offer special holiday designs, such as a Santa and Jack O’ Lantern flower pot.

Korean artist Yong Ho Ji utilizes scrap tires to transform them into recycled masterpieces. Many of his products are in the form of animals or mythical creatures such as dragons, but he also produces fascinating mutants by combining two different animals and animal/human hybrids. Permanent collections of Ji’s amazing works can be found at the International Contemporary Art Foundation featured in the West Collection inside the Seoul Museum of Art.

Jewelry to Belts, Shoes and More

There are many uses for old tires. Bicycle tires are used to create belts for cyclists who want to showcase their passion for riding. Recycled tire roofs, picture frames, book bags, playground equipment, and entire kitchen sinks are just a few of the interesting creations made from scrap tires.

In Ethiopia, Sole Rebels Footwear collects and sorts used tires, and hand-cuts them into soles for shoes that are long-lasting and extremely comfortable. The company is not only helping to promote a better environment, but by paying fair wages to its employees and using locally sourced materials, Sole Rebels is helping to transform the economic landscape in Ethiopia.

Benjamin Grover graduated with a journalism degree and writes for a number of blogs.