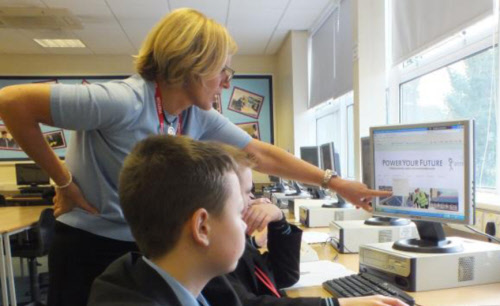 One of the beauties of solar power: it really doesn’t require a lot of sun to create power. So, sure, places like Arizona and Abu Dhabi can creates massive amounts of electricity with the sun… but the UK – not known for its sunny days – can also power homes and businesses with solar panels. The Power Your Future program is taking advantage of what sunlight there is in Great Britain to create “solar schools,” and has already installed 100 solar arrays that will create cost savings and educational opportunities for these institutions.

Isn’t that expensive? Well, yes… and not every school will be able to pay for a solar power system up front. So, the program has partnered with Australia-based CBD Energy to fund new arrays at 22 schools across the UK. The company created bond offerings to raise money for the program, and brought in over £7.5 million (or $12.65 million American). With that money, they’ll be able to generate 3,300,000 MWh of electricity, and prevent emissions of over 1,720 tons of CO2 every year.

Now this doesn’t come completely free to the schools: they still have to pay for the power generated by the solar arrays (a PPA system). But they’ll pay rates that are so heavily discounted that all of the schools will save over £100,000 in the first year alone. Over the 20 year contract of the program, total savings will top £2.3 million. On top of the money saved, these 22 schools will also have a new educational resource available to them: CBD chairman and managing director Gerry McGowan notes

…each school participating in the Power Your Future Programme will also be provided with educational materials and access to the systems’ “smart meter,” allowing them to track the output and carbon savings produced by their solar installation, and encouraging a lasting change in the attitudes of the next generation towards renewable energy. Altering the way our society both thinks about, and relates to, the environment is very important to us.

A sweet arrangement for schools and students – I’m sure there are science teachers just salivating at the possibilities here.

While there’s a lot of private money wrapped up in this program, it’s also supported by the British government: public and private sectors can work together fruitfully! Know of similar programs in your neck of the woods? Share the details with us…