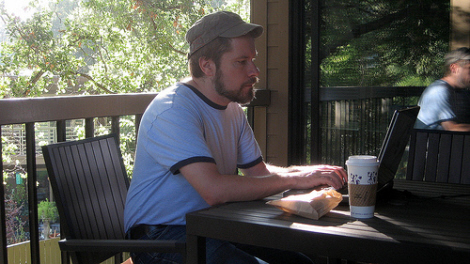 There is a billboard near where I live in Oakland, CA that says, “Driving to work is so Q3 2010.” Today, more than 20 million Americans work from home at least some of the time and it is starting to make a real impact on our carbon footprints. For example, the World Wildlife Fund published a study in 2009 about telecommuting. It found that commuting to work represents between 25-50% of private car driving, depending on where you live. That’s somewhere in the neighborhood of 800 megatons of CO2 each year. If we were to shift to telecommuting on a large scale, we could make a huge impact on car emissions.

However, many people believe it would be impossible for them to switch to telecommuting due to the nature of their job. I am happy to say that I found a way to make telecommuting work for one of the least likely professions. I am a psychotherapist in private practice and I have been working primarily over the phone for the past five years. The switch from therapy in-person to working over the phone was definitely not easy and it took me some time to adjust. Yet, for me, the benefits have been huge.

When I first started practicing as a therapist, I saw clients in an office in Oakland. My commute was 12 miles round trip and it added about an hour to my day including parking and setting things up before the first client arrives. Then about five years ago, an opportunity arose for me to engage another passion of mine. I was offered a part-time position teaching natural building at the Regenerative Design Institute, a Permaculture education center in Bolinas, CA. The idea of seeing counseling clients part-time and teaching people about cob and timber framing sounded like a really balanced life.

The problem was that Bolinas is a 1.5 hour drive from my office and the thought of that kind of commute was too much for me. At the time, I was working with a few people over the phone. Mostly therapists for whom I was consulting, and just one client that one of them had referred to me. I knew that I liked phone counseling as much as working in-person and it seemed like it could create a lot more flexibility in my life, so I took a chance and moved up north to the Permaculture center, leaving my office behind. Some of my clients continued working with me over the phone and others found someone new.

Challenges for the Telecommuting Counselor

While I was saving tons of CO2 and hours of my life by telecommuting, the transition was hard. I had lost all of that wonderful nonverbal information like facial expressions and body posture, so I had to really become attuned to tone of voice. Happily, over time I found some things I like better about working over the phone. I am able to concentrate in a deeper way and just focus on what the client is saying. I have also noticed many people have an easier time opening up over the phone compared to being in person. There is a sense of anonymity that makes many people feel more comfortable. In fact, the research that compares phone counseling to in-person therapy has shown that outcomes are equal and that slightly over half of people who have experienced both types of counseling actually prefer therapy over the phone.

When I eventually moved back to Oakland, I decided to continue working primarily over the phone. Not only does it save a commute for me, but my clients don’t need to drive either. People can do a counseling session from their office at work or from home and it makes the process much more convenient. I am also able to work with people who live in remote areas and don’t have access to good therapists. I have worked with people living in Europe, Mexico, Africa, South Korea and India, which has made my experience so much more diverse.

While many employers still resist allowing people to telecommute and many professions have not yet created a culture around doing it, I strongly recommend working from home if you can. It can be an easy way to cut your footprint and might even create new possibilities in your life.

Want to start telecommuting? You’ll need a good computer. Check out our selection of energy efficient netbooks from Dell, HP, and  Lenovo.