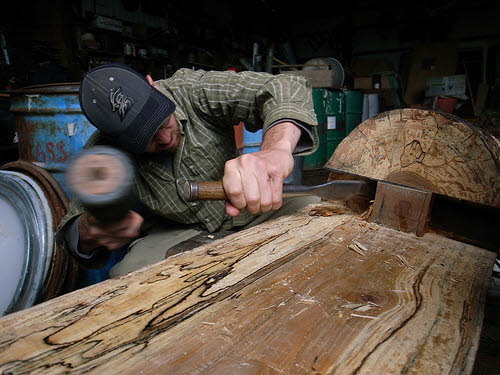 Ever built a house… by hand? Neither had our writer ziggy when he first moved to the Dancing Rabbit Ecovillage. He didn’t let that stop him from starting construction of his own cob home in 2008 (which he documented at his Year of Mud blog). Now, he’s ready to start another project: a timber frame strawbale house. Named Stawtron, the house will be about 300 square feet with wood-fired heat, a greenhouse, and even a screened porch.

Many hands make light work, of course, and ziggy has decided to turn the building of the house into a learning experience for anyone interested. So, in June, 2012, he’ll host a timber framing workshop in which students will actually build the home’s frame. During the two-week class, participants will learn how to choose the right timber, fashion it into lumber, and frame it into a building. The kicker: they’ll do it all with hand tools and traditional techniques.

Sound like something you’d like to do? This natural building workshop will cost $2000, but that will cover your meals at the Milkweed Mercantile, as well as tenting accommodations. ziggy’s posted all of the details on his blog, and I’m sure he’ll be happy to answer any questions.