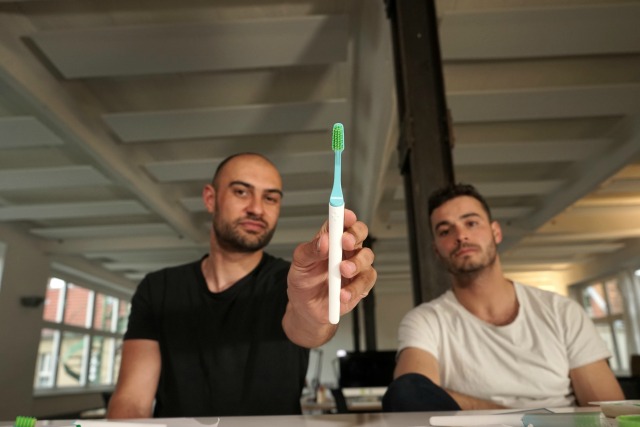 Got a toothbrush? Of course you do. What will you do with it when it’s time to replace it? Throw it away, right – these kinds of consumer products generally can’t go in the recycling bin. While there are greener options out there – toothbrushes made from recycled plastic or renewable materials like bamboo and wood – they’re generally based on the same overall principle: buy a toothbrush, use it for 2-3 months, throw the whole thing away (although a few options are recyclable). Rinse and repeat…

This model works great for toothbrush manufacturers, but it’s not so good for the environment: about 50 million pounds of these consumer products get tossed every year. What if manufacturers of toothbrushes took a look at a different model – say, the shaving razor – for inspiration? In other words, create a toothbrush where the part that gets used up – the head – can be replaced on a reusable handle? That would reduce a lot of waste, wouldn’t it?

That’s the approach German designers Fabian Ghoshal and Benjamin Beck (above) have taken with TIO, a design that incorporates bioplastics with a replaceable head and reusable packaging. Take a look at their concept:

That’s an impressive amount of brainpower going into something as simple as toothbrush… but, then, there’s a lot of waste we can avoid pretty easily with this approach. The only concern I see at this point is the kind of bioplastic used: as others have pointed out, using food crops this way isn’t particularly sustainable. But organic wastes would be a good option…

Ben and Fabian have developed a prototype at this point, but are crowdfunding the next steps in bringing the TIO to market by pre-selling it through a Kickstarter project.  If you’d like to try out the TIO once it becomes available around October, consider kicking in. They’re aiming for €40,000 (about $46,000 US), and are already well on their way.

I know Eco-Dent has a similar product; if you’re aware of other toothbrushes with replaceable heads and reusable handles, share them with us.