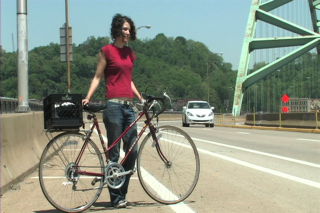 There is one thing Pittsburghers can agree upon, besides the greatness of the Penguins or Steelers. That is: “there’s way more bikes on the road this year, aren’t there?”

Indeed there are. Whether it’s for economic reasons, or the result of a growing green consciousness, I am one of hundreds of Pittsburgh bicyclists taking to the streets this year.

When I was transitioning into living sustainably, I thought I’d hate bicycling for transportation. But in just a few days, I realized what many other bicyclists in my community have realized, too: that I would honestly never want to travel any other way.

There’s so many benefits to bicycling! In a previous post, I mentioned that biking earned me the healthiest body I have ever had. There’s more than that, however.

In addition to conserving money, what about conserving time? Especially if you work a 9 to 5 job, you can get to work and home again at even half the rate of the cars stuck in traffic. Nothing feels quite so good as whizzing past long strings of cars, idling at red lights, in the downtown district.

Sometimes, though, it does take a bit longer to get somewhere, but tradeoff is immense. It may take me 15 extra minutes to get somewhere, but I feel so invigorated and accomplished afterwards. This is unlike those pent-up, disconnected drivers who simply cannot stand a slower bicyclist in front of them in the lane. I feel much more pity for their uncontrolled frustration issues than I do for making them drive a bit slower. If you’re fearful of such drivers, keep in mind that by law, bicyclists have the right to do anything that feels the most safe to them, which means you do NOT have to ride in the right-hand gutter with rubble and storm drains. Ride in the middle of lane if you feel concerned. If that doesn’t work, it is sometimes appropriate to hop up on sidewalks, but avoid this if you can.

So that’s all grand, but–how can bicycling be sustainable? Bicycling can be sustainable, to my judgment, if: all the parts are reused from unwanted, donated bicycles. I also suggest you learn to maintain and repair the bike for yourself, and acquire the bicycle of your dreams… for free. What is this fantasy place for bike lovers? It is actually a reality, in many cities around the world. In Pittsburgh, it is called Free Ride!, and it is absolutely the best place to be on a Tuesday night.

For years, I was a public transit aficionado, constantly trumpeting the benefits of buses. I have to admit, though, that it didn’t take me long to swear off buses (and their rising costs to ride) forever, in favor of a totally free bicycle that could spirit me off to anywhere–back alleys and unique routes included.

My confidence has grown as a bicyclist, too. Last night I was feeling proud, fast, and stronger than ever, when…

my left food slipped off the pedal and entered my front wheel between the spokes. The front wheel stopped, and due to the momentum of my bike, I began to flip over the handlebars. I ended up with only a banged-up knee and scrapes, plus the feelings associated with experiencing one’s first big crash. Dazed. Grateful to the help that quickly surrounded me. More than any other emotion… I was just incredibly depressed that my bike was un-ridable.

Today I hold an ice pack on my knee and type this post. In a few minutes I will catch a bus to Free Ride!, where I will try to repair my front wheel and fork (the only truly damaged parts on the bike). Later, even with the swollen knee, I will try to ride it home, dumpster diving along the way.

No little brush up can scare me from the best mode of transportation–and if reused, sustainable to boot–that I’ve ever found.