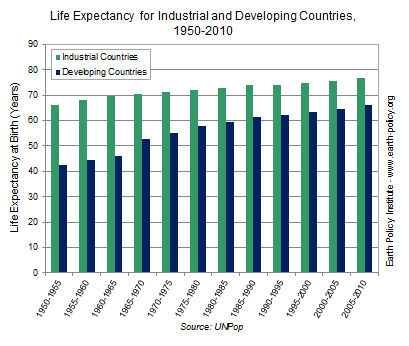 Life expectancy remains lowest in sub-Saharan Africa, where people can expect to live 53 years on average. Six countries in this region have lower life expectancies today than they did in the 1970s: Botswana, Lesotho, South Africa, Swaziland, Zambia, and Zimbabwe. These countries also have some of the world’s highest HIV prevalences. South Africa, with 5.6 million people infected (11 percent of the total population), has more people living with HIV than any other country in the world. Following four decades of gains, life expectancy in South Africa has fallen dramatically — from 61 years in the early 1990s to 51 years today. 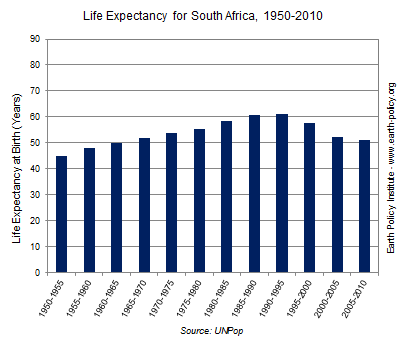 Whereas Western Europeans can now expect to live for an average of 80 years, life expectancies in some former Soviet Union countries remain far shorter and improvements have stalled or even reversed. In Russia, life expectancy peaked in the late 1960s at a little over 69 years. It declined to 65 in the early 2000s before rising back up to 68 years today. Russian men born today will only live 62 years on average, compared with 74 years for women — which is the world’s largest life expectancy gender gap. 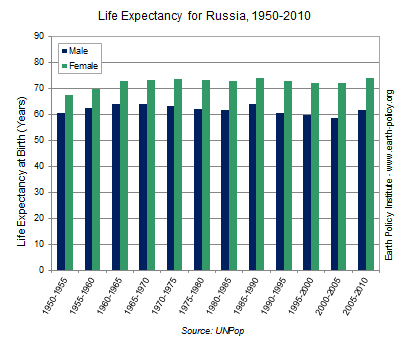 Belarus and Ukraine also have significant gender gaps and lower overall life expectancies now than they did in the 1960s. Hazardous drinking in this region is a major concern: according to the World Health Organization, 20 percent of deaths among men in Russia and neighboring countries can be attributed to alcohol, compared with 6 percent among men globally. Extreme industrial pollution has also likely contributed to relatively early mortality in the region. A 2011 report from the Blacksmith Institute and Green Cross Switzerland identified Eastern Europe as one of the regions where people’s health is most affected by pesticide, lead, and mercury pollution.

Some high-income countries are improving life expectancy but failing to keep pace with their peers. For example, since 1980 the United States has only extended its average expected lifespan by 4 years, while Japan — the country where people can expect to live the longest, to age 83 — has increased it by 6 years. A 2011 study from the University of Washington found that in addition to lagging behind leading countries, the United States has significant geographic and racial disparities in life expectancy. 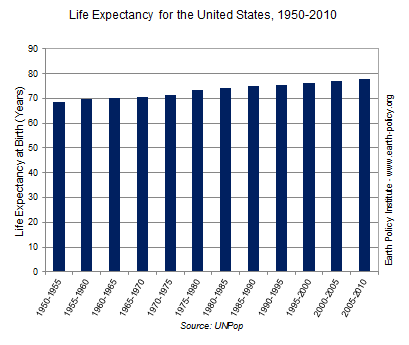 Studies suggest that the slower U.S. rate of improvement may be a legacy of heavy smoking — historically more common in the United States than in Japan and many European countries — as well as of obesity and a lack of universal health care.

The good news is that many of the places where life expectancy is lowest can increase it by working to prevent the spread of HIV/AIDS and by improving access to basic health care. As people in developing countries live longer and as their economies industrialize, however, the concern is that they may face the same challenges now holding back higher-income countries. Continuing progress in human health will depend on reducing pollution and fostering healthy lifestyles for everyone.

For more data and discussion on life expectancy and other demographic trends, see World on the Edge by Lester R. Brown and Earth Policy Institute’s 2011 Population Indicator, “World Population Hitting 7 Billion,” at www.earth-policy.org.