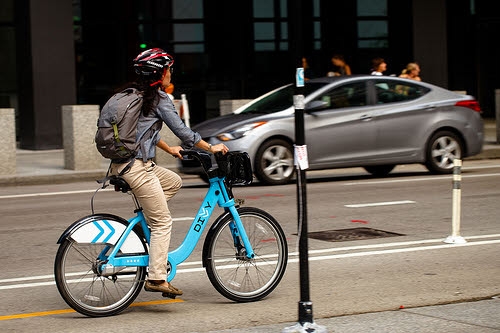 The opening of the San Francisco Bay Area bike share on August 29, 2013, brings the combined fleet of shared bikes in the United States above 18,000, more than a doubling since the start of the year. The United States is now home to 34 modern bike-sharing programs that allow riders to easily make short trips on two wheels without having to own a bicycle. With a number of new programs in the works and planned expansions of existing programs, the U.S. fleet is set to double again by the end of 2014, at which point nearly 37,000 publicly shared bicycles will roll the streets. The largest bike share in the United States is in New York City, where some 6,000 bicycles are available at 332 stations in Manhattan and Brooklyn. The program opened at the end of May 2013, and in less than 3 months hit 2 million trips. On busy days, each bike gets checked out seven times or more, a remarkably high borrowing rate. The city ultimately hopes to expand the program to other boroughs and grow to 10,000 bikes.

The other large bike-sharing debut in 2013 was in Chicago, where 1,500 Divvy bikes now grace the streets. The program hopes to double to 3,000 cycles by the end of the year, ultimately growing to 4,000 strong—reinforcing the city’s efforts to dramatically boost biking. In addition to making shared bikes readily accessible transit, Chicago plans to extend the path and trail network to within a half-mile of all residences. Before New York and Chicago came on the bike-sharing scene, Washington, DC, held America’s top spot. Its program has grown to over 2,000 bikes, spreading into neighboring communities. Transport planners from cities around the country have made the pilgrimage to Washington to ride one of the cherry-red Capital Bikeshare bikes and see firsthand how the popular program works. Since 2007, biking in the nation’s capital doubled to 3.5 percent of all commuter trips, and bike sharing has made it more convenient to travel the expanding web of marked cycle lanes.

Other large bike shares include Nice Ride in Minneapolis and St. Paul (1,550 bikes), Hubway in the Boston area (1,100 bikes), and DecoBike Miami Beach (1,000 bikes). Aspen, Columbus, Fort Worth, and Salt Lake City are among the more than a dozen programs that opened in 2013, joining a list of cities that have enjoyed bike sharing for longer, including Denver, San Antonio, Chattanooga, Madison, and Fort Lauderdale. On the international scene, the United States is just catching Europe and Asia’s bike-sharing tailwind. Worldwide, more than half a million cycles can be picked up in well over 500 cities in 51 countries. Italy and Spain have the greatest number of programs, while China is home to two thirds of the global shared bike fleet.

New York is the only American city to make it onto the list of the world’s 20 largest bike-sharing programs. In fact, five cities have more shared bikes than the entire U.S. fleet. Four of them are in China, where Wuhan reportedly has some 90,000 shared bikes for its 9 million people. Hangzhou has 69,750 bikes that are well integrated with that city’s mass transit.

The world’s third largest bike share is Vélib’ in Paris, the first large-scale program to gain worldwide attention. Since its 2007 launch, riders have taken 173 million trips. According to the program, one of the nearly 24,000 Vélib’ bikes gets checked out every second of the day. Vélib’ claims to have the highest bike density among the world’s top programs, with one bike available for every 97 city residents. Within the next year, the U.S. bike-sharing fleet will have caught up with Paris. New entries in Florida could push the country past that mark, with launches expected in Miami (500 bikes, an expansion from Miami Beach), St. Petersburg (300 bikes), and Tampa (300 bikes). Phoenix is also hoping to launch a 500-bike program that will double in size as neighboring cities join in. Rollouts hoped for in 2014 include large offerings in Los Angeles (some 4,000 bikes) and San Diego (1,800 bikes), as well as 500+ bike programs in Portland (Oregon), Pittsburgh, Philadelphia, and Seattle, along with a number of smaller markets.

The new San Francisco Bay Area scheme is starting out relatively diffuse, with 700 bicycles split between San Francisco and other cities along the 50-mile rail line south to San Jose. Planners note that it ultimately could grow to a network of 10,000 bikes, better allowing rail riders to travel the first and last mile or so of their commute on two wheels. As communities continue to improve their biking infrastructure and as enthusiasm for an efficient, environmentally friendly, healthy, and enjoyable form of transportation grows, bike sharing has a bright future in the United States. For more information on bike-sharing in the United States and globally, see “Dozens of U.S. Cities Board the Bike-Sharing Bandwagon” and “Bike-Sharing Programs Hit the Streets in Over 500 Cities Worldwide,” by Janet Larsen.