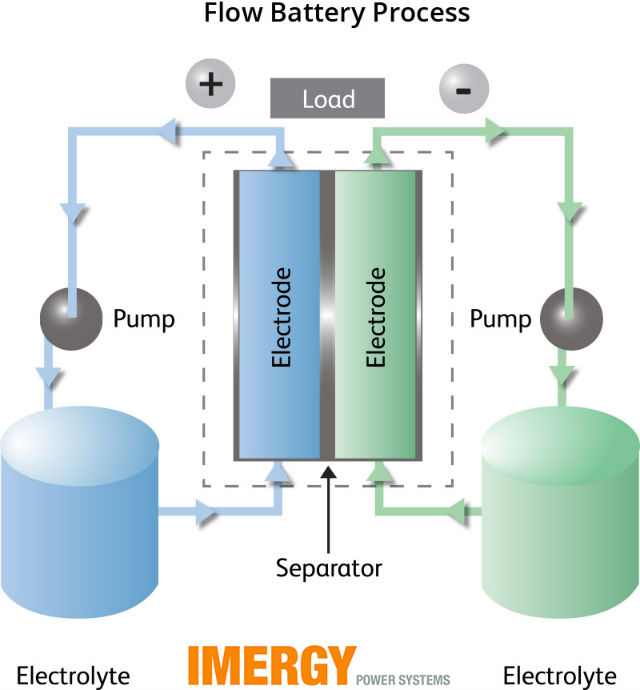 We know we have to stop using fossil fuel,s and we know that wind and solar power could meet most of our energy needs if only we could store it somehow. Imergy Power Systems of Freemont, California says it has a vanadium flow battery that will do just that. According to Next Big Future, there are more than a billion tons of vanadium in the fly ash waste collected from coal fired generating plants and stored in this country.

Vanadium can exist at 4 different oxidation states, which makes it ideal for use as the electrolyte in a liquid battery. Imergy’s system can use contaminated vanadium extracted from fly ash waste rather than more expensive purified vanadium. That helps keep the cost of the vandium flow battery to just $300 per kilowatt hour, almost half the current industry standard.

The Imergy battery, based on research by NASA, is scalable, air cooled and can be fully discharged without damage. Because it is a modular design, individual components can be replaced as needed, meaning this battery can last virtually forever.

With affordable electricity storage, power companies can generate power during low demand periods and store it for use when demand peaks. By the same token, solar and wind energy can be stored for use later. Communities can join forces to generate and store all the electrical energy they need. Factories and hospitals can have access to electric power even if the grid is down.

The transition to renewable energy sources like solar and wind power has been delayed for decades by the absence of efficient, reliable and affordable storage systems. Breakthroughs like the vanadium flow batter and the water battery under development at the University of Southern California are critical to weaning society off its addiction to oil for its energy needs.

Take a look at Imergy’s own explanation of this new technology, and its possibilities for residential and commercial use.