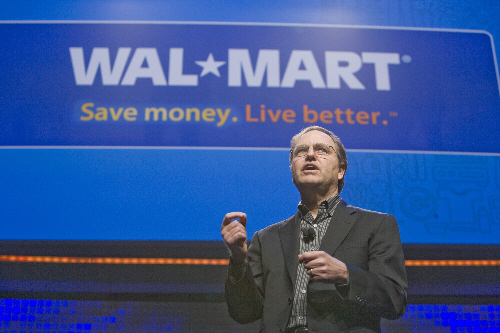 In October 2005, Wal-Mart CEO Lee Scott gave a speech entitled “Twenty-First Century Leadership.” Part idealistic vision, part concrete blueprint, the speech made all of us in the green community stand up and take another look at the company. Regardless of one’s thoughts about Wal-Mart as a corporate citizen, all had to admit that Scott set bold long-term goals for the company: powering itself on 100% renewable energy, creating zero waste, and selling “products that sustain our resources and our environment.”

Last night, at the company’s Year-Beginning Meeting in Kansas City, Scott gave another speech, titled “The Company of the Future,” that returned to the themes of corporate leadership, social responsibility, and sustainability. Like its predecessor, this speech combined vision with practical goals. I’d originally planned to write one post giving a broad overview of the speech, but given Wal-Mart’s position as the world’s largest retailer, and the breadth of the ideas presented, a series seemed more appropriate.

Energy savings have already played into the company’s attempts to transform itself (and, admittedly, its image). From a business perspective, this makes sense: energy’s an expense. Scott’s focus in this speech, though, wasn’t so much on the company using energy more efficiently itself, but on helping customers save energy:

How would Wal-Mart do this? Scott outlined a couple of initiatives:

Our goal is to work with suppliers to make the most energy intensive products in our stores, anywhere in the world, 25% more energy efficient within three years. We do not know exactly how we will get there. We do not even know if our supplier can make items like hair dryers use 25% less energy. But we do know that our approach works – to partner with suppliers, to help customers make better decisions, and to use our business model to drive out waste. …

Today we are announcing initial steps that we hope to achieve by 2010: every air conditioner that we sell in the U.S. will be Energy Star rated; and all our flat-panel televisions will be 30% more energy efficient. The energy savings on televisions alone would be enough to power over 53,000 single family homes for an entire year.

In addition, Scott noted that the company would be “rolling back” prices on items like 3M Allergen Air Filters, and aiming to double the sale of items like weather stripping.

These more concrete proposals (and, clearly, there were plenty of qualifiers on all of them) were partnered with some more visionary ideas, such as “[providing] eco-friendly energy to our customers”:

Imagine your customers pulling into your parking lot, and seeing wind turbines and solar panels, and being able to charge their cars while they shop. I think that would make them feel good about shopping at your stores. It would also make them feel good if they could save money in the process. What if we fed the power generated by those wind turbines and solar powers back into the electrical grid? Just imagine the impact of our customers being able to buy eco-friendly energy at the unbeatable Wal-Mart price.

Scott even noted that he’d reached out to auto makers to see if there was a role the company could play in the hybrid/plug-in hybrid market (while admitting that such a role may not exist).

The vision for energy saving presented in last night’s speech was compelling, and the audience of store managers and executives was obviously receptive. Some may argue that the vision outweighs the actual steps being taken here, and that’s probably fair. At the same time, I was very intrigued by the notion of expanding Wal-Mart’s “Save Money. Live Better.” mantra into the area of energy itself. As I noted to a commenter on another post the other day (who’d made a very valid point about “green” products often not being an option for people at the bottom of the socioeconomic ladder), energy efficiency can be a way for these folks to “green” their lives while meeting their most immediate needs in a manner they can afford. They don’t even need to think of it as “greening their lives”: if they see the connection between efficiency and money saved, that’s a win. If Wal-Mart can successfully convey this story to their shoppers, more power to them.

I’m very interested to hear your responses to these concepts. At this point, it doesn’t look like the major organizations critical of Wal-Mart have responded to Scott’s speech, but I’ll keep an eye out. The entire text of the speech is available, as is a video of Scott giving the speech.

Disclosure: While the lion’s share of the funding for this trip came from Green Options and my own pocket, Wal-Mart Corporate Communications did pick up the tab for dinner last night.

Update: Wal-Mart Watch has published a response to the environmental initiatives in Lee Scott’s speech here. So far, Wake-Up Wal-Mart has responded only to the portions of the speech focused on health care issues.