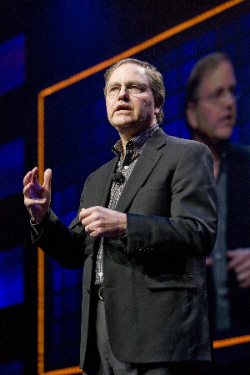 It’s been almost two weeks since I traveled to Kansas City for Wal-Mart’s Year-Beginning Meeting, so that’s probably more than enough time to think about the broad implications of CEO Lee Scott’s “Company of the Future” speech, and the plans outlined for energy efficiency and supply chain sustainability. In that time, I’ve also thought about Enterprise Rent-a-Car’s green initiatives, and Joel Makower and Greener World Media’s State of Green Business 2008 report (and I’ll be writing more about both). I’ve also spent some time at Wal-Mart Watch‘s site, and read through some of the sustainability-related criticism that organization has offered.

Each meeting I’ve had with people at Wal-Mart has challenged me: there’s still that activist in me that wants to shout about past and current issues, and he competes with a more pragmatic business thinker who wants to praise the company (and others) for seeing a business case for sustainability. I think we need both voices to be a part of the mix: not just mine, of course, but many activists and business thinkers contributing to the conversation. To add my two cents, I’ll focus on some of the issues raised by the company.

Energy Efficiency: I’m pretty sure it’s universally accepted, even by critics, that Wal-Mart’s moves towards more energy-efficient stores are positive steps. This is also a prime example of good business thinking on sustainability: energy efficiency contributes to a healthier bottom line while also producing lower levels of emissions. Where I get tangled up, though, is the combination of these efforts with the company’s growth plans.

When I attended the company shareholder’s meeting last summer, I remember hearing that Wal-Mart plans to build more stores, largely Super Centers. According to a company press release from October:

Wal-Mart is executing the plan announced June 1, 2007 to moderate its U.S. supercenter growth. The Company expects to open 195 supercenters in the United States this year, down 30 percent from the 281 opened during last fiscal year. Projections for next fiscal year and the following year call for 170 and 140 supercenters respectively, including expansions and relocations. …

There’s obviously a time differential here, and I can’t say for certain how the numbers have changed with the new growth plan released in June. I also don’t know how many of these new stores will be high-efficiency models such as the one in Kansas City, or will include solar panels and other clean energy technologies. And I’m not even addressing land use issues (which, in fairness, that company has tried to offset with its Acres for America program)

In his latest speech, Scott laid out plans to help customers save energy; this seems like a very fitting step for the company’s new “Save Money. Live Better.” motto, and also seems like a step Wal-Mart could take with relative ease and great success. I’m hoping to hear how further growth will work with this commitment. Scott offered a vision of customers being able to charge electric vehicles with electricity produced by wind and solar installations at a store. I’d love to see nearer-term plans include building along public transit routes, or in mixed-use developments, or in urban centers where walking and biking were possible. How about expanding the “Personal Sustainability Project” concept to customers, with a commitment to tailoring development plans to those projects? Could Wal-Mart come out and say “We want all of our customers to commit to driving less, and we’ll build in a manner that helps them do this?”

Supply Chain issues: On one level, I found some of the supply chain commitments among the most exciting of Scott’s speech, particularly the call to the retail industry to develop single standards for environmental and social responsibility. As the world’s leading retailer, the company seems to be stepping up to the plate to use that role to make the industry more sustainable. As I said in my post on this subject, though, the devil will be in the details. If such standards are developed with full transparency, and the participation of a wide range of stakeholders, and if the standards are monitored by a truly independent organization, this could transform the retail industry.

Like one commenter, though, I was a bit disappointed by Scott’s commitment to “work with the Chinese government and NGOs to make sure suppliers comply with Chinese environmental laws and regulations.” I’m not an expert in international law by any means, but the concept of complying with Chinese law seems like a pretty low standard. If Wal-Mart and its suppliers are going to continue to source products from China (and it’s clear that they are), a move towards sustainability in this area has to include moving well beyond compliance. The standard mentioned above could do just that: if the retail industry sets standards that go well beyond Chinese law, the government in Beijing will have to follow suit by raising its legal standards. Wal-Mart has the opportunity (and many would argue, the power) to change China’s manufacturing landscape.

But why stop with transforming China? Why not reinvigorate the American manufacturing and agricultural landscapes? Ideally, I’d love to see more local and regional sourcing from the company (and this is happening on a small scale). It’s easy from my perspective to say this, of course: with current trade agreements, it’s hard to see how the company can do this on a large scale in the near future without, in many cases, having to raise prices significantly. Many Wal-Mart customers do shop there because they can make their budgets stretch further. On the other hand, a revitalized American manufacturing sector could create more disposable income, which would benefit the company. And this is a company famous for creating efficiency in its supply chain: couldn’t this work with more domestic sourcing? I don’t pretend to have the answers to these questions… they’re questions worthy of discussion, though.

Overall, I still remain hopeful about Wal-Mart’s sustainability efforts, because I really do believe the company is thinking differently. One downside to the company’s size is that it can’t turn on a dime: implementing these concepts will take time and planning. But it’s also making these statements and commitments in a new media environment: the advent of “digital Marxism” (to borrow a phrase from Daniel Pink) means that those watching the company can publish what they think to a potentially wide audience. Wal-Mart executives have to know that they can’t simply greenwash: there’s just too much oversight. No one can throw visions and commitments like these out, and not expect to be held accountable for their implementation. Sure, Mr. Scott used very careful language in separating visions from concrete commitments. Nevertheless, Pandora’s box is open: the idea of a greener Wal-Mart is out there now, and many stakeholders are watching closely to see how these visions transform into reality.

OK, I suppose the practical business thinker ultimately wins here. But I think that’s how companies like Wal-Mart will change: they’ll recognize the business case for taking that journey towards more sustainable operations, and plan and act accordingly. My inner activist may still shout about steps not (yet?) taken, or sins of the past, but if Wal-Mart recognizes the business potential here (and I think they do), then maybe it’s time for that activist to shift from shouting to engaging in dialogue with its former nemesis. We don’t need purity of thought from Wal-Mart: we need measurable, concrete actions that address the company’s environmental footprint, and more discussion with a broader range of stakeholders to make those actions happen. We need more conversations on a definition of sustainability that includes the environment, human rights, and labor issues. That conversation has started… so let’s make sure that, while we continue to keep a critical eye on the company, we’re also participating in it.