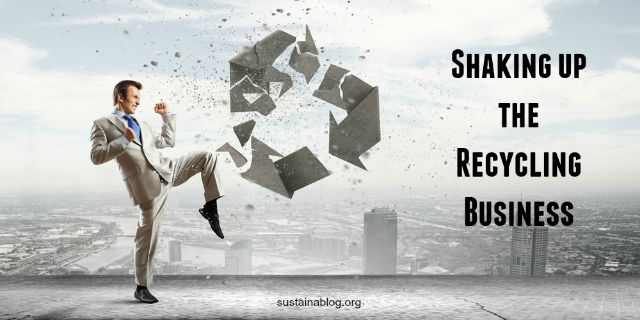 A few years ago here in St. Louis, you couldn’t turn on local news or open a newspaper without seeing a report on copper theft. Old abandoned buildings were getting their old copper pipes stripped, and newer air conditioners were getting taken just for the copper in them. The reason: the price of the metal had shot skyward, along with other commodities. Now, those prices are heading the other way… so much so that major companies like Waste Management are having to cut their financial projections because of losses in their recycling division.

CEO David Steiner doesn’t seem to be panicking, though: he believes that “new technologies, new contracts, and different sources of revenue” will help the company return to higher profits. And this isn’t the first time he’s spoken to this issue: he noted in late 2013 that ““If you want us to invest [in recycling], we need a sustainable business model.”

So, what technologies, contracts, and revenue sources would shake up the recycling business? If you’ve got insight here, share it with us…

In other waste biz news this week,

Another new 3D printer: We’ve seen 3D printing filament made from recycled material; now, an “innovation space” in Tanzania, Buni Hub, has developed a printer made from electronic waste. They plan to open source their plans, and work with others to develop the printer further into a scalable product.

Rocket reuse: Those of you who are old enough will remember that one of the promises of the space shuttle was reuse: booster rockets parachuted back to Earth for further missions. Private space travel company SpaceX is taking a hint from this discontinued program, and exploring ways “to land and refurbish a rocket’s first launch stage.”