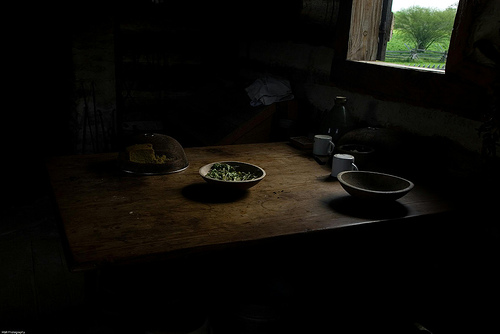 More and more people each day are joining the sustainable table. I am not referring to the wonderful website about healthy and ethical food choices, but heck it’s worth a mention anyway. By “the sustainable table,” I mean the conversation about how to bring the vision of a greener world into reality. So when I read “Evangelical leaders host ‘creation care’ summit in Orlando-area church” in the Orlando Sentinel, I got this funny picture in my head of church folk sitting down for brunch with a bunch of barefoot tree-huggers.

“‘We are the ones who are late to the table,’ [Rev. Joel] Hunter said. An emerging national evangelical leader on environmental issues, Hunter said the goal of the conference was to ‘get mutually stirred up’ and to ‘assume stewardship’ of this issue.”

Evangelical leaders gathered at Northland, a Church Distributed to hammer out “creation care.” If these green evangelicals are beginning to embrace terms like “sustainable,” “green,” and even “carbon neutral,” but still shudder at the sound of “environmentalism,” are we really all sitting at the same table? Or are we sitting at completely different tables, looking at the same evidence, but pretending to ignore each other’s solutions?

The elephant in the room is the rocky relationship between environmentalists and evangelicals. Both have a history of dismissing one another; environmentalists for being anti-religious and misanthropic, and evangelicals for intolerance and anthropocentrism. The rivalry has dissolved, probably because the mounting evidence of global warming has hit a critical level of importance for just about every household in America, across the political spectrum.

As someone who has been a part of both conversations, I have some constructive ideas for both parties if we are going to sit together.

Evangelicals should be familiar with Lynn White, Jr.’s groundbreaking essay, “The Historical Roots of Our Ecological Crisis.” White makes the assertion that Christianity is the most anthropocentric religion the world has ever seen. The belief that “nature has no reason for existence save to serve man” has played a role in the utter disregard for the planet. Humble pie is on the menu, and evangelicals need to be able to admit that people outside their circles have something to teach them with regard to morality.

Environmentalists must recognize the amount of influence that religion has. If substantial progress is to be made, we will have to work together. Inroads have been made. With more evangelicals seeing the need for environmental responsibility, they are working alongside secular groups in clean-up projects and public policy efforts (Scroll to “Evangelical leaders join scientists to fight global warming“). Amidst all the dirt and sweat, new relationships are being forged.

If we are all going to sit at the same table and talk about the future, we need to be familiar with each other’s language. The word “stewardship” implies ownership of the Earth’s resources as well as human priority and should be used carefully outside of Sunday morning worship. “Creation care” sounds like the Earth is a damsel in distress in need of a knight in shining armor. We can’t forget that the planet did OK taking care of itself for billions of years before humans took over.

I have hope that we can work together for a better future, but we can’t ignore one another’s efforts.

So what does this table look like? Tree-huggers look a lot different than they used to. Has the message been diluted or enhanced now that the evangelicals have arrived?