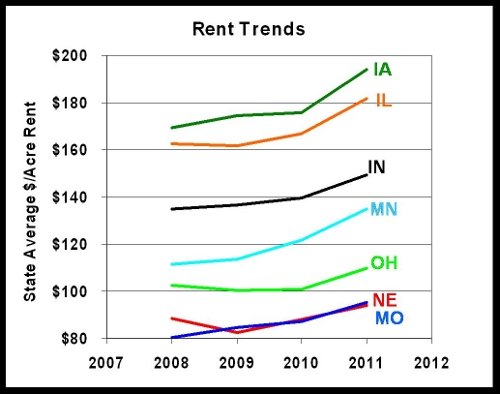 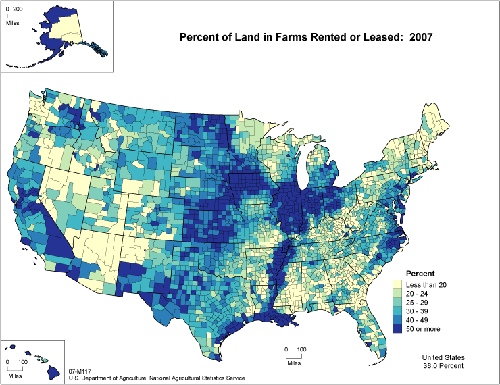 Nationwide, farmers only own 60% of the land they farm. In many of the most productive row cropping areas of the Midwest, the percent of farmer-owned land is significantly lower (see Map above from the USDA, 2007 Census of Agriculture). Much of our farmland resource is owned by non-farmers and rented to those who actually farm. Some of that rented land is owned by investors or real estate speculators, but most of it is actually still owned by the descendants of the families who used to farm it, often several generations back. These are the families who have been part of the steady trend of urban migration for more than a century.

Why Does Farm Ownership Matter?

This ownership question is important for several reasons. US agriculture not only supplies our domestic needs for many crops, but we are also among the major grain exporters of the world. Our farmers, and our farmland owners, play an important role in determining whether we will be able to supply the increasing, global demand for food. Land ownership is also a key issue for agricultural sustainability. The most sustainable row crop farming practices can actually “pay their own way,” but they do so over time by building soil quality. Those soil changes are at the heart of the environmental benefits, but they also increase the productive potential and yield stability of the land. Land rental rates are closely related to yield potential. Thus, the economic benefits of soil building are realized by the owner of the land. If growers don’t own the land that they farm, or if they can’t predict how long they will be the ones farming each given field, they can’t rationally make the optimal, long-term investments in soil improvement.

Earlier in the history of rural-to-urban migration, there were often were personal relationships between land owners and renters. That allowed for more stable “land tenure” (the same grower might rent a field for many years). But those connection have faded over generations. In many cases today, the ownership is through a family trust for inheritance purposes. The leasing arrangements are often handled by a farm management company that provides the service of making the connection and negotiating the lease terms. Land rental has become much more of a year-to-year arrangement.

Is Rental of Farmland A Good Or Bad Thing?

Rental is actually a practical arrangement for both sides. The city-dwelling families get a steady stream of income. The farmers are able to expand their operations without incurring the sort of debt risk that bankrupted many of them in the 1980s. The problem is that most lease arrangements don’t provide the mechanisms to favor a long-term, soil-building protocol. Addressing this issue will be challenging, but, first, it is useful to look at what we know about the “farmland rental business” as a whole. 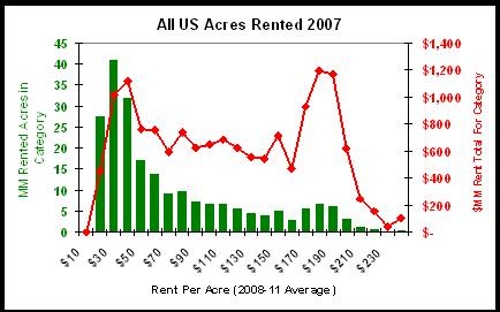 Every 5 years (2007, 2002, 1997…), the USDA conducts and publishes the “Census of Agriculture.” This includes dozens of interesting statistics, including the number of farmland acres in each county that are rented. Since 2008/9, the USDA-NASS has been tracking average land rents at the county level (before that, such data was only available for certain states). Combining these two data sets (see graph above), we see that farmland rental is a very substantial industry representing 217 million acres of land and combined rent payments of $14.7 billion/year. Much of the land area (green bars, millions of acres) is rented for low prices, while there is another subset of the land in the $150 or more range (13% of the total area). The value of the rented land (red line, millions of dollars) is concentrated in the higher rent land, representing 1/3 of the total value, or $4.9 billion/year. Not surprisingly, much of this high value land is in the heart of the “corn belt.” 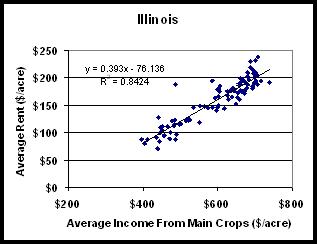 Land rents are actually a very good measure of the productive potential of a parcel of land. In the graph above, the X axis gives the average per acre value of the major crops grown in each county in Illinois. The Y axis is the county average rent, and there is obviously a strong relationship between the two. The graph below plots the same sort of data for all the corn belt counties where corn, soybeans, wheat, and sorghum are the dominant crops.

In the histogram below we see that average farm rents for the same “corn belt counties” generally represent 25-30% of the total gross crop income of that county. Thus, land rental is one of the largest single, year-to-year costs that a grower must pay. 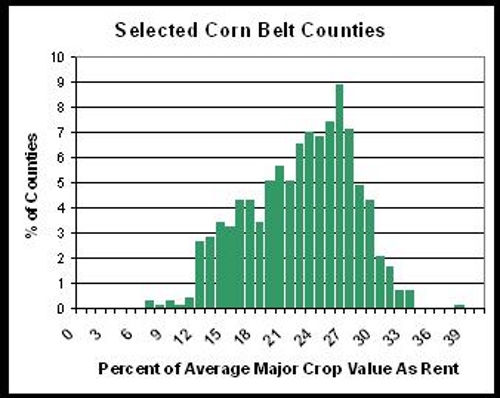 As I mentioned earlier, a several-year investment in soil-building practices can increase the yield on a given piece of land. Beyond that, improved soils capture and store moisture more effectively so that the yield is better insulated from year-to-year variation in rainfall. That issue is likely to become increasingly important with climate change. The owners of farmland have the long-term financial incentive to find farmers who are willing and able to execute a soil-building strategy. What this would take, however, would be a mechanism for the farmer to share in the “upside potential” of land improvement, and a mechanism for the landowner to help carry the near-term investment costs and risks associated with that farming change. All of this is certainly possible, but it entails major challenges in terms of communications and legal/financial arrangements. Land lease practices are only one of several structural barriers to more sustainable farming. Normal crop financing and crop insurance are also designed around year-to-year economics and a year-to-year mindset.

By definition, sustainable farming must involve a long-term perspective. Many of the people who are in the key role of farmland ownership don’t know much of anything about farming of any kind, let alone what constitutes the cutting edge of sustainability. Therein lies both the challenge and the opportunity.

A more detailed analysis of this issue is posted on SCRIBD.