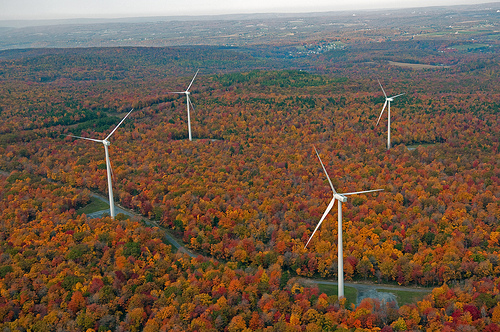 Going green is something that many of us are starting to see as a necessity if we wish to find a sustainable way to live on planet Earth. Human caused climate change is getting harder and harder to argue against, causing many to change the way they interact with the planet and how they use resources.

The purchasing of things like solar powered electronics, local and in season produce, bundling trips, and walking are just a few of the things that people are doing to use fewer resources and to contribute fewer emissions to our already strained planet. There are many people who are also getting on the renewable energy bandwagon, claiming that this is an emissions free way of getting the power we need to run our nation.

While it is true that wind power in and of itself does not produce emissions in the way that burning coal does, there are emissions inherent in the design, manufacture, maintenance, and removal of the turbines when they have reached the end of their life cycle.

Wind power, from an emissions and pollution stand point, is most definitely a better choice than non-renewable and dirty energy sources such as coal, oil and natural gas, but it is incorrect to say that they are emissions free.

This is not at all to say that wind power is not worth investment or advancement because it isn’t completely free of emissions. All manufacturing produces emissions, it is the amount of emissions produced through the manufacture, maintenance, running, and removal of the power plant that really matters. And here, wind still has a huge advantage over dirty energy sources.

A recent scholarly paper decided to tackle the problem of the emissions of wind power, wishing to quantify the actual emissions so as to make accurate comparisons between wind power and other sources of electrical power generations.

The researchers assumed a 20-year total life cycle for the wind turbines and found that throughout the entire life cycle of the turbine, it produced total emissions between a range of 4% to 14% of the direct emissions of the replaced fossil-fueled power plants.

The large range is due to the different applications for wind power. Off shore wind power generation has more emissions inherent in the design and maintenance, skewing it towards the higher end of the emissions spectrum.

Regardless, wind turbines are a clear winner in the emissions category and as technology improves, so too will the installation of yet more wind power sources.