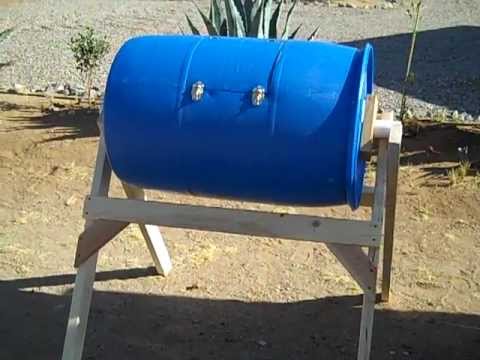 Editor’s note: This post is sustainablog’s contribution to Garden Week at Crafting a Green World… go get inspired with lots of great ideas for your Spring garden!

As a big fan of DIY projects, you might expect to find a compost bin made from pallets, or something similar, in my backyard. Nope – I’ve got a store-bought composter. Why’s that? In truth, I haven’t been really thrilled with most of the DIY compost bin plans out there. Sure. they often make use of “waste” materials, and provide good air flow, and are cheap and easy to build… but, for  he most part, they turn compost harvesting into a real chore. If I have to move the newer materials off of the top to get to the compost, I’d rather go with a pile…

But, if you willing to put in just a bit more work, there are some good DIY plans out there that have the feature I insist upon: a door of some kind for harvesting compost. And, in most cases, I see no reason why you couldn’t make use of things like pallet wood (instead of the store-bought lumber mentioned in several of these plans). You’ll see, though, that some plans do bring together the best of both worlds: ease of access to compost, and upcycled materials.

4 Plans for a DIY Compost Bin Designed For Easy Harvesting

The Wooden Compost Bin with a Door: Danny Lipford’s plan for a DIY compost bin is probably the most complicated of those listed here; it may be the most controversial, too, since he calls for pressure-treated pine. I certainly understand the desire to use materials not treated with pesticides (even though it’s debatable whether there’s a true health risk), so here are some ideas for alternatives for preserving your wood. Lipford’s final product is really nice-looking, though – something you often don’t find with a DIY composter.

Cinder Block Compost Bin: Also a bit complex, but talk about sturdy and long-lasting! The design incorporates boards that slide in and out – I’d imagine that, with a little tweaking, a door like the one on the plan above could be worked in, though.

The Vertically-Stacked Milk Crate Composter: This is the simplest plan of the bunch; it also doesn’t have a door. But, I included it because moving the crates with the compostables inside them is much simpler than digging out those materials. Also, going with the screen/mesh option for lining allows you to sift harvested compost out… easy peasy!

The Homemade Compost Tumbler: Tumblers also make it really easy to separate the finished compost from newer materials, and this plan struck me as relatively easy to build, but with enough attention to detail to keep everything working well and in place.

Know of other plans that feature elements for easily harvesting compost? Let us know about them…

Other Composting posts at sustainablog: