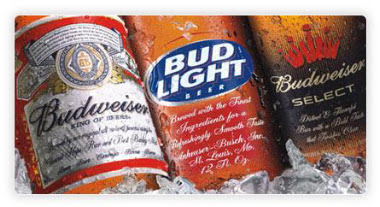 As you might imagine, we hear lots about biofuels here. So, I almost quit reading this story in the Business section of today’s Post-Dispatch after the first few paragraphs, which discusses the local brewing giant’s experiments with growing crops for biofuels on its Fort Collins, Colorado, agricultural site. I stuck with it, though, and found out that there’s some interesting thinking going on at A-B in terms of powering both its breweries and trucking fleets. According to Jeremiah McWilliam’s article,

The brewer’s plan is to create what [John Stier, the company’s director of environmental affairs] calls a “closed loop.” The idea is that spent water from its breweries in Florida and Colorado would irrigate crops. A-B then would harvest and send the crops to a renewable fuel company, which would convert the material into fuel sources to power the brewer’s trucks, heavy equipment and possibly breweries in Florida and Colorado.

Some of the experiments have humble beginnings. The company has planted switchgrass on two acres in Jacksonville, Fla., so University of Florida researchers can determine which native grasses yield the most “cellulosic ethanol,” alcohol derived carbohydrates in cell walls of wood chips or grasses.

Alternatively, a mulching process could convert the plants to gases to fire the boilers in the company’s Jacksonville brewery, Stier said.

A-B is already doing some interesting things in terms of using “waste nutrients from the brewing process to create methane that helps power nine breweries in the U.S. and two overseas.” Some may quibble about the focus on cellulosic ethanol (which McWilliams notes is not a commercially viable technology yet), or even the use of the term “closed loop.” There are certainly legitimate arguments to be made there; I’m still impressed that the company is involved in this kind of thinking and planning. They’re also setting fairly aggressive goals: an increase of its use of biofuels from the current 8% to 15% by 2010.

Interestingly enough, the company could become a major player in the development of cellulosic ethanol because of economic realities: they use corn as an ingredient in some of their beers. Not only would increasing their use of corn-based ethanol raise suspicion among those who aren’t convinced of the environmental benefit of the fuel (and you can count me among them), but A-B would be contributing to the rising price of a commodity they need to buy.