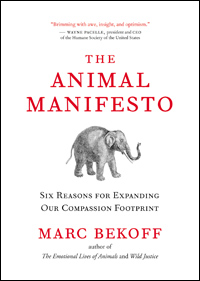 Author’s Note: A free review copy of this book was provided to me by the publisher, New World Library, which is part of the Green Press Initiative. Like most of their titles, the book was printed on 100% post-consumer recycled paper.

There may be few clearer signs of a book’s impact on you than if you find your eyes frequently popping open wide with surprise, and if you experience a constant desire to get out of your chair and call your friends to tell them about what you just read. Marc Bekoff’s recent book The Animal Manifesto: Six Reasons for Expanding Our Compassion Footprint (affiliate link) was, for me, one of these types of books.

The author of previous groundbreaking works on animals like The Emotional Lives of Animals and Wild Justice, who has also collaborated with the likes of Jane Goodall and others, Bekoff is a deeply knowledgeable guide to the fields of animal behavior, animal research, and human-animal interaction. This “street cred” shows in his newest work—and perhaps his boldest, given his strong desire to initiate great social and individual change through the writing.

As an animal lover and activist, I have done my fair share of research on animals and am constantly amazed by them. But reading this book, written by an experienced and acclaimed researcher of animal behavior, I found myself surprised at almost every turn. I was constantly learning new things, confirming some old ideas, rejecting other old ideas, and hoping that everyone might come to share the realization that animals deserve much more of our respect and kindness than we so often give them.

Bekoff states this fact throughout, onwards from the very first sentence, in which he lays out his purpose in writing a “manifesto” for the animals: “Animals are constantly asking us in their own ways to treat them better or leave them alone. This book is their manifesto,” which reveals their needs and wants, as well as why we should honor their wishes (1). Surely, calling the book a “manifesto” is a strategic maneuver by Bekoff, belying its intentions to persuade and compel action in the world.

But “manifesto” might also make you think of militancy, a sort of Marxian revolution of the downtrodden and an overthrow of the tyrannical, affluent bourgeoisie. Fortunately, Bekoff’s The Animal Manifesto is launching a campaign for compassion, not screaming for violent revolution. He wants you to get active and change the status quo, for sure, but only by increasing your capacity for compassionate action…towards animals, and also for other humans and the planet.

The Six Reasons for Compassion

To make his case, Bekoff divides his manifesto into six chapters to discuss each of his six reasons for being compassionate towards animals. In each, he explains why the reason is justified, provides extensive evidence (both research from prominent experts and anecdotes from the general public) for his claims, and shows the positive effects a resulting change would have for the world at large.

Reason #1: All animals share the Earth and we must coexist.

This reason may seem like a self-evident statement, but the implications it has are actually profound. This is because, Bekoff believes, “Individuals have inherent or intrinsic value because they exist… All animals, including humans, have a right to lives of dignity and respect, without forced intrusions” (23). The problem thus far in history has been that humans have taken a speciesistic attitude towards nonhuman animals. As a result, we have come to dominate them, not coexist with them and accommodate them, and so respecting their right to live happily. Bekoff admits that both sides, humans and nonhumans, must make accommodations. Sadly, humans usually refuse to play fair and instead force animals into more stressful, restricted situations. As one example, he discusses wildlife “management” and its dreadful record of harming animals–being more often “a direct attack on wildlife itself, bent on destroying homes and killing indiscriminately” (40). The numbers he cites here are staggering, making it hard to disagree that we owe them much better…and that we might in turn create a better relationship with them in the process.

Contrary to most scientific thinking, Bekoff here tells us to go ahead and trust our instincts when it comes to judging animal feelings. He discusses how most people can accurately discern animals’ emotional states, without training. The reason lies in the fact that “Animals aren’t emotional beings because we want them to be but because they must be for their own survival–just like us” (57). He then provides several snippets of “Headline News,” consisting of stories from different media sources describing how animals have been proven to think, feel, remember, strategize, and exhibit emotions, all eerily like us humans. (Bekoff uses this same “Headline News” approach in all subsequent chapters, adding some convincing, and rather astounding, weight to his arguments.) One important point he makes here is that science has often erred in its conclusions about animals’ capabilities because it studied them in artificial conditions: laboratories or captivity centers, not their natural habitats. This is a crucial flaw, which also usually entails a great deal of suffering for the animals. The more enlightening, and compassionate, approach is to study the animals in their habitats…which will make us see how truly “thoughtful” and “emotional” they are.

Reason #3: Animals have and deserve compassion.

Following rather logically from reason #2, this chapter describes how animals are not wild brutes, fighting it out in a dog-eat-dog, red-in-tooth-and-claw system of survival of the fittest. In fact, when we study them in their natural homes and with their “families,” we discover that animals “have a natural inclination to work cooperatively and to respond with compassion and empathy” (81). This is something even Darwin professed after his extensive study of animals (and humans). Bekoff reminds us that animals can indeed be cruel, but so can humans; the important thing is their deepest guiding drives and most typical behaviors. We can witness this core compassion with our companion animals and with animal families/groups, of course. However, Beckoff also cites examples of cross-species compassion–animals rescuing other animals, animals rescuing humans, even humans rescuing animals, all at the risk of their own lives. By being compassionate, then, we are in fact being entirely “natural”!

“Compassion begets compassion,” Bekoff states forcefully, and this means that “Whenever we expand our compassion footprint, we only gain more compassion, and we increase the likelihood that we ourselves will be met with kindness” (104-05). Bekoff describes how our disconnection from animals has allowed us to turn them into commodities and to relegate them to torture in factory farms. By disconnecting ourselves from them, placing ourselves above them, we disrespect them and subject them to needless suffering. If we rebuild this connection and offer them respect, we in turn will “allow animals to bring joy into our lives” in profound new ways (125).

Reason #5: Our world is not compassionate to animals.

Having disconnected ourselves so much from animals, we have created a severely cruel world in which they must live–and die–under our power. This is both the longest and the most painful chapter in Bekoff’s book. He hits on all the familiar ways in which humans use, abuse, and denigrate animals, all by choice: “science, education, industrial farming, clothing, zoos, circuses, rodeos, the wildlife trade, and so on” (128). Even those animals closest to us, our companion animals at home, have been treated with horrible cruelty by so many people…and the numbers in so many of these areas only seem to be increasing, despite a reciprocal rise in the efforts and prominence of animal-rights activism. Whether it is due to faulty laws or stubborn adherence to habit, humans have failed to respect and act kindly towards animals in many ways. In addition, humans often display clear hypocrisy in their attitudes: they think animals are too different from us to deserve equal consideration, yet they are enough like us to be good subjects for testing. Sadly, this reasoning has it backwards: “the minds and emotions of animals are simply too much like us to morally justify doing them harm, yet they remain too physically different to make them useful models for helping humans” in research (151). The examples Bekoff cites for this and the other points are heart wrenching but powerful, making it easy to see why we should heed this manifesto’s words and work to make the world more compassionate.

Reason #6: Acting compassionately helps all beings and our world.

This last reason is similar to #4, but it is in fact much broader in scope. Bekoff here is calling us to expand our compassion footprint to all beings, all species, in order to make our world a better place. He writes, “Kindness, living kindness, empathy, and compassion must always be first and foremost in our actions with animals and every other being in this world. … We must go from heartless to heart-full” (209). Consequently, we must seek to help humans in the process of helping animals, sometimes even before we help animals–so that we can then create an environment in which we can truly improve conditions for the animals living near the humans who are harming them. In this concluding chapter, Bekoff proves that he is not trying to raise animals above humans, or help animals at the expense of humans, or take revenge on generations of cruel humans. Instead, he truly seeks to help us act kindly and make a bigger impact through compassion to all beings, with reasonable actions and toleration of differing views. His goal is a kinder world, not a world where animals thrive and humans suffer (which would be a revolutionary reversal of the prevailing situation, of course!).

Through his balanced, tolerant, well-supported, and ultimately inspiring method of “argument,” Marc Bekoff’s The Animal Manifesto provides a fascinating glimpse into the world of animals, as well as a startling look at the world in which those animals live and often suffer at human hands. The book is painful at times, and the author might be criticized by some for not addressing skeptical views head-on and instead simply making his case as if everyone agreed his points are valid. However, his truly heartfelt and well-supported prose will surely make you think about (or re-think) your views on animals and, we can at least hope, initiate a “revolution” in your own life and the world around you. Vive la revolution animale!