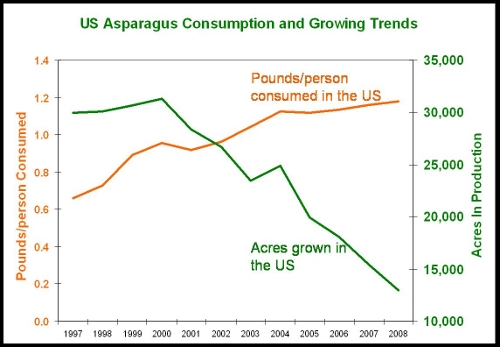 I’d like to make the case that asparagus, as a crop, is a prophetic vegetable.  How the global asparagus industry has changed gives us a window on how the rest of the US fresh produce market is likely to change over time.

We Americans Love Asparagus, but…

As you can see in the graph above,  Americans doubled our per capita consumption of asparagus between 1997 and 2008.   That is a good thing because this delicious vegetable is high in nutrients like vitamin K, folate, vitamin C, vitamin A… and also contains healthy phytochemicals like glutathione and rutin.  Asparagus is still a relatively small part of our vegetable consumption at 1.2 lbs/person compared to broccoli at 5.9 lbs, sweet corn at 9.2 lbs, or fresh tomatoes 18.5 lbs (USDA data).  But what is interesting is that during the same time period that we doubled our consumption, the acres of asparagus grown in the US has dropped in half.  Why the disconnect?  There are several factors involved and many of them represent trends and drivers that will probably effect many other categories in the future.

We seem to be unable to have a civilized conversation about immigration policy in the US let alone actually institute a sane guest worker system for the people who do so much to tend our fruit and vegetable crops.  Because of this, labor is sometimes scarce, sometimes costly and fraught with potential legal issues for farmers.  This is increasingly problematic for all labor-intensive crops, but particularly so for asparagus.  During asparagus harvesting season in the spring, the shoots have to be carefully selected and cut as they emerge from the ground.  No one has perfected a mechanical harvester that can do the job, so relatively skilled pickers are needed 7 days a week.  Asparagus is a perennial crop which means that to start a new block, a grower needs to be confident that he/she will be able to find and pay for all that labor for many years (10-20) to justify the commitment of time and money to a new planting.  Our political dysfunctionality is a big component of the uncertainty that is undermining farmer’s confidence and thus their decision about planting.  Combine that with demographic trends, and look for a food future where only crops that can be harvested mechanically will prosper.

Politics Have Influenced Where Asparagus is Grown

The US government funded research and support to develop asparagus as a crop for South American farmers with the goal of giving them alternatives to growing drug crops.  They also created an Andean Trade Preference.  This was quite successful in the 1980s with relatively small growers selling to processing companies that exported canned and frozen product.  The industry stagnated in the 1990s as those processed markets shifted to China.  To survive, the asparagus industry started to shift to fresh exports and this tended to favor larger players as is always the case for fresh produce that is sold to distant customers with strong leverage.  Consolidation is already a long-term trend in US fresh produce, and it will continue both here and at our import sources.  Sourcing from China will be a continuing trend as it is now for many organic commodities that are not perishable.

The Peruvians Have Learned How to Cultivate Asparagus Year-round

The most successful asparagus cultivation has been in special micro-climates in the “rain shadow” of the Andes mountains, particularly in Peru.  Here there is land for planting where there is NEVER any rain.  There is irrigation water available. Some sources have been in elaborate irrigation systems for thousands of years. However, there are concerns about its sustainability because of climate change or excessing pumping from some aquifers  In any case, it turns out that asparagus can be tricked into going dormant most times of the year by inducing drought stress.  This allows the Peruvian growers to have different fields set up to be harvested at different times.  There are not places in the US, Mexico or Canada that have the right combination of dryness and temperature to do this, so Peru supplies our market for most of the year when North American pickings are not available.   Many people are advocates of “seasonal” produce consumption, and it is important, but the reality of consumer behavior is that we learn to eat things in greater quantities when we can count on them being available.  This and retail marketing tendencies will continue to favor year-round offerings.

Growing Asparagus Local Sounds Like A Great Idea, But…

Asparagus is actually a vegetable that is better suited than most to local production.  It can grow even in relatively cold places as long as it has a good summer to store energy in its underground “crowns” that then enable it to push up as new shoots for the several week harvest window.   Many states used to be significant producers of asparagus including places like New Jersey, Michigan, Washington, Illinois and Indiana.  One of the most advanced asparagus breeding efforts in the world was at Rutgers in New Jersey.  Asparagus will be an important test of the strength of the “Local” and “Seasonal” food movements.  There are many factors that will militate against these goals for asparagus, not matter how good it sounds (and it would be really great and fresh).

First of all, agricultural labor supply is even a bigger uncertainty in many of these regions.   Also, who would make a 15-20 year commitment to a piece of land near a city that could have development potential?  Asparagus would not be a good candidate for a U-Pick because you really need to know what you are doing when harvesting or you compromise the life-span of the crowns.

People like to blame “Big Ag” or “Industrial Farming” for the trends in our food supply.  Asparagus is a good example of how what really happens is driven by forces such as economic realities, consumer behavior, retailer leverage, politics and weather.  Farmers, at any scale, must simply respond to these drivers or go out of business.

Here is a challenge for a grocery retailer  that wants to make a public commitment to local production.  Give someone the financing and long-term contract that would allow them to devote some land to the production of local asparagus. Set the contract pricing in such a way that the labor will be available and affordable.

You are welcome to comment here or to Email me at feedback.sdsavage@gmail.com

Looking for a unique gift for loved one? Consider something made from hemp… take a look at our current listing of hemp backpacks, clothing, jewelry, and body care products.