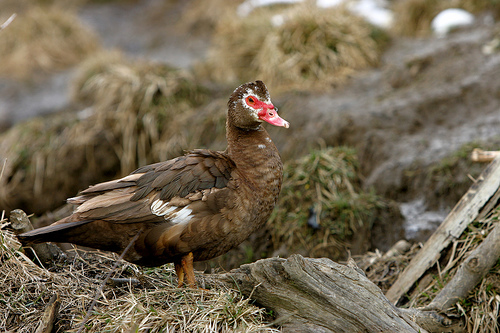 Last weekend, I slaughtered a duck.

My partner and I recently traded several jars of pickles and some homemade butter for a whole duck from our friends at a nearby community, Red Earth Farms. The trick was that we had to slaughter, butcher, and clean the duck ourselves.

I am an omnivore. I am very selective about the meat I eat. Typically, I will only consume it if I know where it came from — when I know who raised it and how it was raised. And unless it came from a responsible source and was raised organically, I won’t partake.

As an omnivore, I have felt some strong urge to take more responsibility in the process of eating meat. Simply cooking it is definitely not enough — to take a part of the process of preparing meat from the whole live animal is an experience that cannot be replicated, something that I had never experienced.

How to Slaughter a Duck… with Compassion

And so I walked to my neighbors’ home, where Chad opened up the pen with five ducks puttering about. We looked at them for a moment before he scooped one up and handed it to me. I then had the opportunity to feel the duck — the softness of its feathers, the gentleness of its muscles. It was a beautiful animal and I suddenly felt very inadequate holding it.

But the hard part had yet to come. I followed Chad’s instruction and sat down, with the duck between my legs. I stroked its neck for a while, feeling quite nervous about what was yet to come. This was an entirely foreign experience to me, the likes of which I had never experienced myself firsthand. In fact, I’ve only witnessed the slaughtering of an animal once in my whole life. How far removed from our food we have become, I thought…

Finally, I said thank you, closed my eyes, and swiftly cut the animal’s neck. I hesitantly looked down to see the duck twitching, its life now ended.

At that moment I noticed just how hard my heart was racing. Was it adrenaline? No… it was more akin to fear, leading into awe. Even more surprising to me was when I felt a sudden wetness come over my eyes. This I was unprepared for!

I was shocked. I walked home solemnly, duck in hand, holding back that wetness in my eyes, trying to find the words to describe the experience, the sensation to my partner. To wield such a power over an animal’s life, to take on that full responsibility, to be a part of that process made me speechless, simply in awe.

I have always claimed the importance of having a greater connection to our food, but I had not experienced that closeness with an animal before I slaughtered the duck. I can finally claim to know what it is like to end the life of an animal, to butcher and dress an animal, and to prepare it with love and gratitude. Truly, the experience cannot be replicated. It makes me savor the thought of a day when I am able to raise animals of my own.

This is an experience that, unfortunately, many people will never have. I would bet a pretty penny that many would not relate to hamburgers and fried chicken the same way once they have the experience of mindfully butchering an animal for a meal.

That roast duck was one of the best meals I have ever had the opportunity to prepare.

Not ready to butcher your own meat? Vegan meat substitutes provide an ethical means of adding the flavor and texture of meat to your diet… without the killing. Check out our full range of vegan food products, including Tofutti dairy substitutes and tofu.