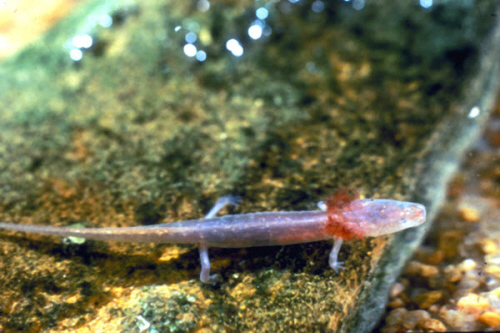 Barton Springs Pool has been a popular attraction in Austin, Texas since the mid-nineteenth century. In 1918, the property containing the pool was ceded over to the city of Austin. In the 1920s, the city enlarged the swimming hole by damming the springs and surrounding it with concrete barriers. Since then the pool has been a sort of retreat for Austin residents who can swim in the cool water and read or sunbathe on the grassy banks. On any given Summer weekend, the pool is packed with families, couples and kids.

But all of this almost came to an end in 1997 when the U.S. Fish and Wildlife Service declared that a special kind of salamander found only in Barton Springs was an endangered species. According to the Wildlife Service, the Barton Springs Salamander (above) was dying out due to the destruction of aquatic plant life in the pool and the use of high-pressured hoses, hot water, and chemicals in the pool’s maintenance. Additionally, urban runoff into the springs and increased development along the Barton Springs watershed were also threatening the clean water supply of the springs—the clean water that the salamanders depended on for survival.

Barton Springs is fed by the Edwards Aquifer. The aquifer stretches across huge swaths of central and west Texas and supplies water to hundreds of towns and thousands of individuals across the state. The fresh groundwater from the aquifer that surfaces at Barton Springs retains a constant temperature around 69°F. The Barton Springs Pool, therefore, warms very little in the summer and cools off only slightly in the winter. Bathers that enjoy a cool swim in the summer months can jump into the water to escape the winter chill during December or January.

Gathering public support for the Barton Springs Salamander, which measures only about 2 ½ inches long, was difficult initially. After all, the salamander was threatening to close one of the city’s most beloved spots—the very place that many Austinites learned to swim or took their first date.

However, as more research was conducted on the salamander, it became evident that humans and salamanders could coexist if humans were willing to adapt a little bit. So the city of Austin and other Texas wildlife agencies came together with a plan to accommodate both species. To begin with, they reintroduced aquatic plant life into the pool and around the springs. They also began practicing eco-friendly pool maintenance, washing the pool walls safely and limiting the number of chemicals used on the pool.

The City of Austin has also been watching water pollution levels more closely and working to purchase areas that it identifies as Barton Springs contributing and recharge zones. By limiting human development in these zones the city is making the pool a cleaner spot for both humans and salamanders. In the wake of the salamander scare, Austin also developed a number of environmental watchdog groups such as the Save Our Springs Alliance. Today those groups not only work to protect Barton Springs but advocate for environmentally sustainable practices all across the city.

If you were to head to Barton Springs Pool now, you’d find the same scene you might’ve found fifty years ago: girls lying out in the sun, boys doing flips off the diving board and parents in the shallow end teaching their kids how to hold their breath. It wouldn’t have been this way without compromise. Barton Springs is a success story. It is a story of a community coming together to preserve and protect their world. It is a story of people who cared, who found a solution and who, in saving this seemingly insignificant species, made our world just a tad bit more interesting.

Most importantly, the story of the Barton Springs Salamander is a story that can be replicated. If enough people care, we can choose to make environmentally responsible decisions and act in environmentally responsible ways. If enough people care, we can make our homes compatible with the homes of the species that were here before us, species as small, fascinating and utterly bizarre as the Barton Springs Salamander.

Brian writes for the McMinn Law Firm. The Austin lawyers at McMinn practice personal injury law in Austin as well as surrounding communities.

Image credits: US Fish and Wildlife Service; US Geological Survey