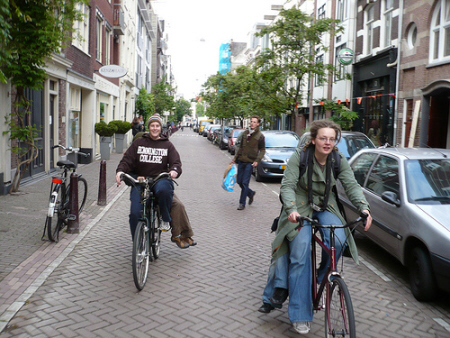 The bicycle has many attractions as a form of personal transportation. It alleviates congestion, lowers air pollution, reduces obesity, increases physical fitness, does not emit climate-disrupting carbon dioxide, and is priced within the reach of the billions of people who cannot afford a car. Bicycles increase mobility while reducing congestion and the area of land paved over. Six bicycles can typically fit into the road space used by one car. For parking, the advantage is even greater, with 20 bicycles occupying the space required to park a car.

Few methods of reducing carbon emissions are as effective as substituting a bicycle for a car on short trips. A bicycle is a marvel of engineering efficiency, one where an investment in 22 pounds of metal and rubber boosts the efficiency of individual mobility by a factor of three. On my bike I estimate that I get easily 7 miles per potato. An automobile, which requires at least a ton of material to transport one person, is extraordinarily inefficient by comparison.

The bicycle is not only a flexible means of transportation; it is ideal in restoring a balance between caloric intake and expenditure. Regular exercise of the sort provided by cycling to work reduces cardiovascular disease, osteoporosis, and arthritis, and it strengthens the immune system.

Bike-friendly developments around the world

World bicycle production, averaging 94 million per year from 1990 to 2002, climbed to 130 million in 2007, far outstripping automobile production of 70 million. Bicycle sales in some markets are surging as governments devise a myriad of incentives to encourage bicycle use. For example, in 2009 the Italian government began a hefty incentive program to encourage the purchase of bicycles or electric bikes in order to improve urban air quality and reduce the number of cars on the road. The direct payments will cover up to 30 percent of the cost of the bicycle.

China dramatically demonstrated the capacity of the bicycle to provide mobility for low-income populations. In 1976, this country produced 6 million bicycles. After the reforms in 1978 that led to an open market economy and rapidly rising incomes, bicycle production started climbing, reaching nearly 90 million in 2007. The surge to 430 million bicycle owners in China has provided the greatest increase in mobility in history. Bicycles took over rural roads and city streets. Although China’s rapidly multiplying passenger cars and the urban congestion they cause get a lot of attention, it is bicycles that provide personal mobility for hundreds of millions of Chinese.

Ripon College in Wisconsin and the University of New England in Maine have gone even further. Rather than build new automobile infrastructure, they find it cheaper to give each incoming freshman a bike if they agree to leave their cars at home. Replacing cars with bikes on campus is reducing air pollution and traffic congestion while creating a sense of community.

Among the industrial-country leaders in designing bicycle-friendly transport systems are the Netherlands, where 27 percent of all trips are by bike, Denmark with 18 percent, and Germany, 10 percent. By contrast, the United States and the United Kingdom are each at 1 percent.

What makes a bike-friendly community… or country?

An excellent study by John Pucher and Ralph Buehler at Rutgers University analyzed the reasons for these wide disparities among countries. They note that “extensive cycling rights-of-way in the Netherlands, Denmark, and Germany are complemented by ample bike parking, full integration with public transport, comprehensive traffic education and training of both cyclists and motorists.” These countries, they point out, “make driving expensive as well as inconvenient in central cities through a host of taxes and restrictions on car ownership, use and parking.… It is the coordinated implementation of this multi-faceted, mutually reinforcing set of policies that best explains the success of these three countries in promoting cycling.” And it is the lack of these policies, they note, that explains “the marginal status of cycling in the UK and USA.”

Fortunately, many Americans are working to change this. Prominent among them is Congressman Earl Blumenauer of Oregon. An avid cyclist, he is the founder and coordinator of the 220-member Congressional Bike Caucus.

Nearly 75 percent of U.S. police departments serving populations of 50,000 or more now have routine patrols by bicycle. Officers on bikes are more productive in cities partly because they are more mobile and can reach the scene of an accident or crime more quickly and more quietly than officers in cars. They typically make 50 percent more arrests per day than officers in squad cars. Fiscally, the cost of operating a bicycle is trivial compared with that of a police car.

Colleges and universities are also turning to bicycles. As campuses are overwhelmed by cars, traffic congestion, and the need to build more residential facilities, they are being forced to take innovative measures to discourage cars. Chicago’s St. Xavier University launched a bike-sharing program in the fall of 2008, in which students use their ID cards to rent bikes. Emory University in Atlanta, Georgia, has introduced a free bike-sharing system, also based on ID cards.

Back at the national level, the Netherlands, the unquestioned leader among industrial countries in encouraging bicycle use, has incorporated a vision of the role of bicycles into a Bicycle Master Plan. In addition to creating bike lanes and trails in all its cities, the system also often gives cyclists the advantage over motorists in right-of-way and at traffic lights. Some traffic signals permit cyclists to move out before cars. By 2007, Amsterdam had become the first western industrial city where the number of trips taken by bicycle exceeded those taken by car.

Within the Netherlands, a nongovernmental group called Interface for Cycling Expertise (I-ce) has been formed to share the Dutch experience in designing a modern transport system that prominently features bicycles. It is working with groups in Botswana, Brazil, Chile, Colombia, Ecuador, Ghana, India, Kenya, Peru, South Africa, and Uganda to facilitate bicycle use. Roelof Wittink, head of I-ce, observes: “If you plan only for cars then drivers will feel like the King of the Road. This reinforces the attitude that the bicycle is backward and used only by the poor.…But if you plan for bicycles it changes the public attitude.”

Both the Netherlands and Japan have made a concerted effort to integrate bicycles and rail commuter services by providing bicycle parking at rail stations, making it easier for cyclists to commute by train. In Japan, the use of bicycles for commuting to rail transportation has reached the point where some stations have invested in vertical, multi-level parking garages for bicycles, much as is often done for automobiles.

Electric bikes: the best of both worlds

Sales of electric bicycles, a relatively new genre of transport vehicles, also have taken off. E-bikes are similar to plug-in hybrid cars in that they are powered by two sources—in this case muscle and battery power—and can be plugged into the grid for recharging as needed. Sales in China, where this technology came into its own, climbed from 40,000 e-bikes in 1998 to 21 million in 2008. China had close to 100 million electric bicycles on the road that year, compared with 18 million cars. These e-bikes are now attracting attention in other Asian countries similarly plagued with air pollution and in the United States and Europe, where combined sales now exceed 300,000 per year.

In contrast to plug-in hybrid cars, electric bikes do not directly use any fossil fuel. If we can make the transition from coal-fired power plants to wind, solar, and geothermal power, then electrically powered bicycles can also operate fossil-fuel-free.

Above all, the key to realizing the potential of the bicycle is to create bicycle-friendly transport systems. This means providing bicycle trails and designated street lanes for bicycles, designed to serve both commuters and people biking for recreation, and making bike parking facilities and showers available at workplaces. This simple bicycle is a winner in the Plan B economy.

Image credit: celesteh at Flickr under a Creative Commons license