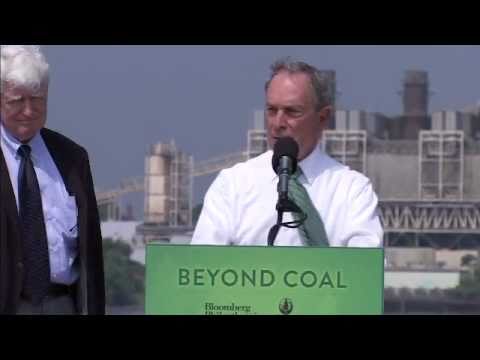 At a press conference on July 21, New York City Mayor Michael Bloomberg announced that he was contributing $50 million to the Sierra Club’s Beyond Coal Campaign. Michael Brune, head of the Sierra Club, called it a “game changer”. It is that, but it also could push the United States, and indeed the world, to a tipping point on the climate issue.

The Sierra Club’s Beyond Coal Campaign has two main goals. The first is to prevent the permitting and construction of new coal-fired power plants. So far 153 proposed power plants have been taken off the board. The second goal is to close the 492 existing plants. The Sierra Club lists 71 plants already scheduled for total or partial closure, most of them by 2016.

The efforts to stabilize climate will be won or lost with coal, the world’s largest source of carbon emissions. The effort to phase out coal is now well under way in the United States, the world’s second ranking coal user after China.

The Potential Effects of the Bloomberg Philanthropies Grant

There are likely to be many ripple effects from the Bloomberg grant. To begin with, it may encourage other philanthropists to invest in climate stabilization.

The prospect for investment in coal, already deteriorating, will weaken even faster. In August 2010, the Rainforest Action Network (RAN) announced that several leading U.S. investment banks, including Bank of America and J.P. Morgan, had ceased lending to companies involved in mountaintop removal coal mining. Now with Bloomberg’s opposition, investors will be even more wary of coal.

The Bloomberg-Sierra initiative again focuses attention on the 13,200 lives lost each year in the United States due to air pollution from burning coal. If deaths from black lung disease among coal miners are included the number climbs even higher. The number of coal-related deaths in one year dwarfs total U.S. fatalities in the Iraq and Afghanistan wars. We invest heavily in protecting the lives of our troops in the Middle East, and rightly so. Bloomberg is saying let’s do the same for our people at home.

In addition, this initiative brings attention to the health care costs to society of burning coal. These are currently estimated at more than $100 billion per year, roughly $300 for every person in the United States or $1,200 for a family of four. These costs are real, but it is the American people, not the coal companies, who shoulder the burden.

Further reinforcing the urgency of phasing out coal are the more extreme weather events that climate scientists have been warning about for decades. During the first half of 2011 we watched TV news channels become weather channels. First it was a record number of tornadoes in one month, including the one that demolished Tuscaloosa, Alabama. Then, a few weeks later, an even more powerful tornado demolished Joplin, Missouri. As drought and heat sparked record or near-record wildfires in Arizona, New Mexico, and Texas, the lower Mississippi Basin was flooding. Searing heat waves scorched the southern Great Plains, the Midwest, and the East Coast. Intense heat has continued to break records across the country as Texas suffers its most severe one-year drought on record.

Another Nail in Coal’s Coffin?

For coal, the handwriting is on the wall. Between 2007 and 2010, coal use in the United States dropped 8 percent. (See data at www.earth-policy.org.) Meanwhile, more than 300 new wind farms came online, totaling over 23,000 megawatts of generating capacity — the electricity output equivalent of 23 coal-fired power plants.

When people were asked in a national poll where they would like to get their electricity from, only 3 percent opted for coal. Despite the coal industry’s heavy expenditures to promote “clean coal,” it is still a loser in the public mind.

In addition to the Sierra Club, RAN, and a talented team of Earthjustice lawyers, the anti-coal movement also has allies in Friends of the Earth and Greenpeace, the latter with its highly developed capacity to focus public attention on environmental issues. This was evident in May when a Greenpeace team of eight daring activists scaled the 450-foot Fisk coal plant smokestack located in Chicago and painted “Quit Coal” on it. They were drawing public attention to the deadly air pollution in the city coming from the plant.

As the United States closes its coal-fired power plants, it sends a message to the world. With Michael Bloomberg’s grant bolstering the Sierra Club’s well-organized program to phase out coal, we can now imagine a coal-free United States on the horizon. The United States could again become a world leader, this time in stabilizing climate.

Image credit: Rubenstein at Flickr under a Creative Commons license