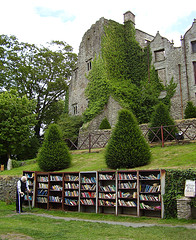 In the spirit of the seemingly endless campaign for the presidency of the U.S., I am going to put a little green twist on a question that was raised on the PBS program, Bill Moyers Journal, the other night. Moyers showed clips of one question that CBS’ Katie Couric had asked of all the candidates she interviewed;

“What is the one book, other than the Bible, that you would take with you into the White House as the next president?”

But as soon as I heard the question, my irrational fascination with all things green led me to wonder, what book with an environmental theme would I consider to be an essential read for the next president. I thought about that question a lot and came up with too many answers.  Please help me flesh these out a little by helping me answer the green version of Katie Couric’s question:

[Other than the Bible] what ‘green’ book should the next president take into the White House?

Leave a comment with the name of the green-themed book you think is a must read for the incoming president and you could win a book yourself. Here’s the catch, you’ve got to make a case for it.

Valid entries will consist of a reply that is concise, clearly articulated and well-reasoned. One submission meeting those very simple requirements will be randomly drawn to win a copy of …

Power of the People: America’s New Electricity (2008) by NREL‘s Carol Sue Tombari. A winner will be randomly drawn from all valid entries received by Friday February 8 at 5pm MST.

If you choose a book that does not have an overt environmental theme, please be explicit about why you think it should/could be. I am very interested in what you all have to say and I look forward to reading your responses. Be sure to leave a valid email address (that will only be used for notifying the winner).

FYI: Video clips of the candidates’ answers to Katie Couric’s question can be seen here and the text answers are below. Moyers viewers have posted several replies at his blog and he has said he would answer the question soon himself (the non-green version).