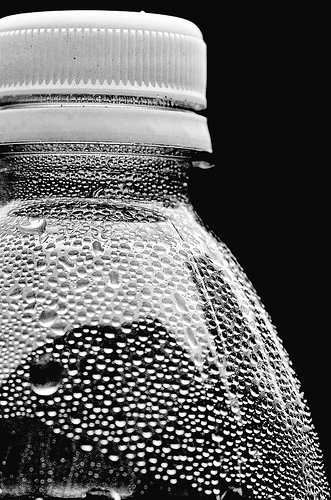 Last night, I dreamed that I was going on a long hike and needed a water bottle—but there were none to be had. So of course I woke up thinking about the amazing transformation of consciousness around bottled water: a real triumph of grassroots Green marketing (and organizing) over a well-funded and powerful industry.

When I was a kid in the ’60s, bottled water was a rarity. Most people I knew drank tap water. Unfiltered. A few health-fooders drank distilled water (which had no taste and I considered it undrinkable) or bottled spring water in gallon jugs—maybe three to five brands taking up a very small section of the supermarket beverage aisle. Some offices did have “bubbler”-style water fountains, with two- or five-gallon jugs upended over an electric dispenser/cooler. Oh yes, and plenty of people drank seltzer.

But most of us still put a glass under the faucet and turned on the tap. End of story.

The Rise (and Fall?) of the Bottled Water Business

U.S. bottled water sales peaked in 2007, though. That year, Americans drank an average of 29 gallons of bottled water —astonishing growth considering the figure had only been 16 gallons as recently as 2000. If my math is right that’s 181 percent more bottled water consumption than just seven years earlier.

But since that time, bottled water has become decidedly uncool. Environmental and corporate justice activists (and particularly Corporate Accountability International’s “Think Outside the Bottle” campaign, launched in 2004) have raised hard questions about such issues as

And all this attention is definitely having an effect. Many conscious consumers have switched to filtering their own tap water. I personally stopped buying seltzer for home consumption several years ago (and was delighted when my wife bought me a seltzer maker so I can still have my bubbly without feeling guilt). Bottled water consumption is still far higher than it was a decade ago, but you can expect that to fall off rapidly—because a small group of activists understand marketing, and are willing to be persistent.

I’ve written for 30 years abut the importance of conserving water, and the resource issues we’ll face if we don’t (see for instance, my post on World Water Day). One very easy step is to use bottled water only when it’s a necessary alternative, such as traveling in an area where the water isn’t safe to drink. The rest of the time, filtered tap will do you just fine.

International speaker, marketing consultant and copywriter Shel Horowitz specializes in win-win Green and ethical strategies that lower costs, boost profits, and have potential customers calling YOU. His eighth book, Guerrilla Marketing Goes Green: Winning Strategies to Improve Your Profits and Your Planet (Wiley, 2010, co-authored with Jay Conrad Levinson)—demonstrates that businesses can be Green, ethical AND profitable.

Image credit: Muffet at Flickr under a Creative Commons license