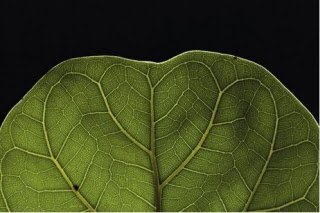 Last September, I took a look at research in Australia aimed at creating synthetic chlorophyll in order to produce much more efficient solar panels. Today’s National Geographic News points to other experiments that involve attempts to mimic how plants convert sunlight into energy, with a focus on the process of “water splitting.” According to the article,

Water splitting is a complex chemical reaction that takes place in leaves, algae, phytoplankton, and other green organisms.

The plants use the sun’s energy to break down water into its components: oxygen and hydrogen.

The oxygen produced is released into the atmosphere. The hydrogen is used to convert carbon dioxide taken from the air into the carbon-based organic molecules that form plants’ tissues.

Researchers in London believe they’ve discovered the enzyme responsible for this process, called photosystem II. Like their Australian counterparts, these scientists believe that creating a synthetic version of this enzyme could allow us to mimic the process of photosynthesis, and create either hydrogen from water, or “…further mimic plants and combine the hydrogen with carbon compounds to produce fuels.”

It sounds like this research is in fairly early stages, but the idea is kind of staggering: literally making fuel from water and sunlight by harnessing natural processes. According to lead scientist James Barber from Imperial College London, “If the leaf can do it, we can do it.” That may strike some as arrogant, but I’d say these scientists are definitely looking at the right model for clean energy production.