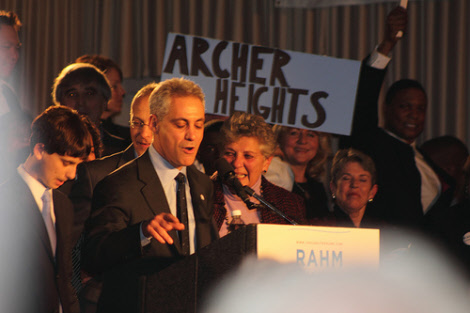 It wasn’t that long ago that you immediately looked to coastal cities in the US for green innovation: if it wasn’t happening in green cities like New York, Portland, OR, or San Francisco, it probably wasn’t happening at all in the US… Austin, TX seemed the only exception to this rule. Then, a few years ago, Chicago suddenly sprung onto the scene.

Chicago? The Hog Butcher of the World? Yep… Mayor Richard M. Daley proclaimed his goal of making the Windy City the greenest in the country in the middle of the last decade, and, now, many in the green media space probably immediately equate Daley with green roofs (a cornerstone of his approach, though not the full extent of it). While Daley certainly had his detractors, and, of course, had a family name associated with “Chicago politics” in its worst sense, he wasn’t just making pronouncements… and Chicago started showing up in top ten lists for greenest cities not simply because of political promises, but because of massive efforts from City Hall and ordinary citizens to make the mayor’s vision a reality.

But the Daley era is almost over: Mayor-elect Rahm Emauel takes the oath of office in just about three weeks. I know I thought about the city’s green initiatives when I heard the long-term mayor wouldn’t be seeking re-election, and wondered if his leadership was critical to keeping these efforts going… especially in our current economic environment. Emanuel certainly made some impressive promises on this front… but, well, we all know about politicians and promises.

So, I was pleased when good friend and founder of Terracom Public Relations Christine Esposito sent me news of a decision by Emanuel that, thus far, has kind of gone under the radar: not only is the mayor-elect planning to merge the Departments of Fleet Management and General Services (which manages city leases and government-owned buildings), but he’s also appointing former deputy environment commissioner David Reynolds to head up the combined services.

Who? Yep, I didn’t know Reynolds’ name, either (though he’s very well-known in Chicago’s sustainability community), but his appointment certainly signals that the incoming mayor is serious about continuing Daley’s legacy of greening the city. In his previous role in city government, Reynolds was responsible for launching both the Chicago Center for Green Technology, a community hub for green businesses, non-profits, and educational outreach (and also a LEED platinum rated rehab), and the Chicago Green Homes Program, a green building certification for city homes and commercial buildings. His work outside of government in recent years has all been in the green development and technology space, also.

Does One Appointment Signal the New Mayor’s Green Agenda?

So, is this a big deal? Well, consider that the new agency will oversee what are likely some of the most energy intensive parts of the city government: a fleet of over 500 vehicles, a network of fueling stations, and over 400 city-owned buildings. The new Department of General Services will also oversee all the services for those buildings — from maintenance to cleaning to landscaping. The potential for energy savings, as well as greener and healthier practices is mind-boggling… and someone will be in charge who thinks along these lines.

Of course, this isn’t strictly about environmental impact: Chicago, like most American cities, has budget woes, and Emanuel’s merging of the two agencies will help on that front (and avoid the privatization of many city services that Daley had planned to cut costs). But, Emanuel clearly recognizes that “green” isn’t just about the environment or the city’s image… it’s also a smart context for finding cost savings. During the campaign, Emanuel promised “to save at least $5 million during his first year in office by purchasing more fuel-efficient vehicles and by encouraging city employees to share cars, take bicycles and use mass transit.” While we can’t say for certain that he’ll meet this goal, or make energy and other utility cost savings the centerpiece of efforts to trim the budget, these moves certainly signal that the new mayor recognizes the full value of continuing his predecessor’s focus on reducing the city’s resource use while maintaining, and even  expanding, its world-class image.

Haven’t been up to Chicago in a while… may be time for another trip! Chicagoans, are you encouraged by the mayor-elect’s sustainability plans and promises? Anyone, do you think the Windy City’s creating a model for financial and environmental sustainability by recognizing how they feed each other? Let us know what you think.

via the Chicago Sun-Times

Ready to get out on the road on two wheels? Check out our wide selection of road bikes, including the Fuji Absolute 3.0 for women, and the Bianchi Via Narone.

Image credit: juggernautco at Flickr under a Creative Commons license