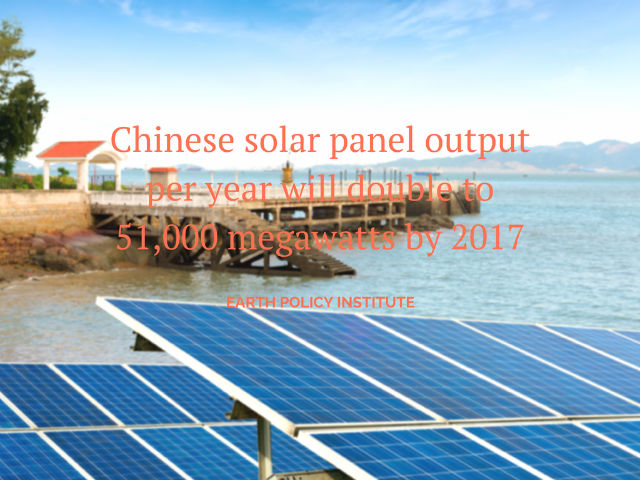 China installed a world record amount of solar photovoltaics (PV) capacity in 2013. While this was the first time the country was the number one installer, China has led all countries in making PV for the better part of a decade. China now accounts for 64 percent of global solar panel production—churning out 25,600 megawatts of the nearly 40,000 megawatts of PV made worldwide in 2013—according to data from GTM Research.

Five of the top 10 solar panel manufacturing firms in 2013—including Yingli at the top and runner-up Trina—were Chinese companies. Coming in third was Canadian Solar, which produces 90 percent of its modules in China. Two Japanese companies and one each from the United States and Germany rounded out the top 10. (See data.)

As demand for increasingly affordable solar power continues to climb around the world, GTM Research projects that Chinese solar panel output per year will double to 51,000 megawatts by 2017, representing close to 70 percent of global production at that time. Beijing no doubt had such a quick industry ramp-up in mind when in May 2014 it announced a new national PV capacity goal: 70,000 megawatts of installed PV by 2017, up from 18,300 megawatts at the end of 2013. To put that in perspective, if it meets that goal China will add more solar electricity-generating capacity in four years than the entire world had in place in early 2011.