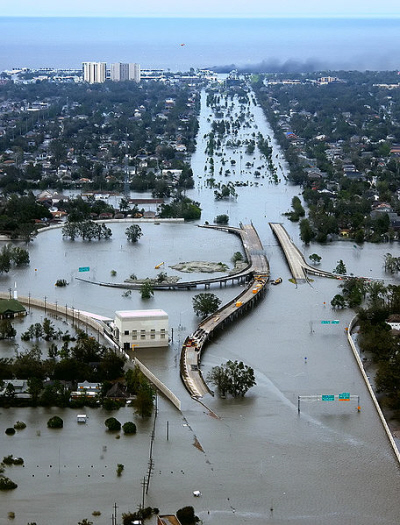 In late August 2005, as Hurricane Katrina approached the U.S. Gulf Coast, more than 1 million people were evacuated from New Orleans and the small towns and rural communities along the coast. Once the storm passed, it was assumed that the million or so Katrina evacuees would, as in past cases, return to repair and rebuild their homes. Some 700,000 did return, but close to 300,000 did not. They are no longer evacuees. They are the first large wave of modern climate refugees.

One of the defining characteristics of our time is the swelling flow of environmental refugees, including those displaced as a warmer climate brings more-destructive storms and rising seas. The prospect for this century is a rise in sea level of up to 6 feet. Even a 3-foot rise would inundate parts of many low-lying cities, major river deltas, and island countries. Among the early refugees will be millions of rice-farming families from Asia’s river deltas, those who will watch their fields sink below the rising sea.

The flow of rising-sea refugees will come primarily from coastal cities. Among those most immediately affected are London, New York, Washington, Miami, Shanghai, Kolkata (Calcutta), Cairo, and Tokyo. If the rise in sea level cannot be checked, cities soon will have to start either planning for relocation or building barriers that will block the rising seas.

River deltas contain some of the largest, most vulnerable populations. These include the deltas of the Mekong, Irrawaddy, Niger, Nile, Mississippi, Ganges-Brahmaputra, and Yangtze Rivers. For example, a 6-foot sea level rise would displace 15 million Bangladeshis living in the densely populated Ganges-Brahmaputra delta. The London-based Environmental Justice Foundation reports that “a one meter [3 foot] sea-level rise would affect up to 70 percent of Nigeria’s coastline affecting over 2.7 million hectares. Egypt would lose at least 2 million hectares in the fertile Nile Delta, displacing 8 to 10 million people, including nearly the entire population of Alexandria.”

Low-lying islands will also be hit hard. The 39 members of the Alliance of Small Island States stand to lose part or all of their territories as sea level rises. Among the most immediately threatened are Tuvalu, Kiribati, and the Marshall Islands in the Pacific Ocean and the Maldives in the Indian Ocean. Well before total inundation, islanders face salt water intrusion that can contaminate their drinking water and make it impossible for deep-rooted crops to survive. Eventually, all crops will fail.

Some 3,000 of Tuvalu’s 10,000 people have already migrated to New Zealand, seeking work under a labor migration program. Larger populations, such as the 300,000 people in the Maldives, will find it more difficult to migrate elsewhere. The president of the Maldives is actively pursuing the possibility of purchasing land for his people to migrate to as the sea level inches upward and makes island life untenable.

Meanwhile, following the 2004 tsunami that so memorably devastated Indonesia, the government of the Maldives decided to organize a “staged retreat” by moving people from the lower-lying islands, some 200 in total, to a dozen or so slightly higher islands. But even the highest of these is only about 8 feet above sea level. And in anticipation of higher seas, the Papua-New Guinea government moved the 1,000 residents of the Carteret Islands to the larger island of Bougainville.

Aside from the social upheaval and the personal devastation of people losing their country to the rising sea, there are also legal issues to be resolved. When does a country cease to exist legally, for example? Is it when there is no longer a functioning government? Or when it has disappeared beneath the waves? And at what point does a country lose its vote in the United Nations? In any event, rising sea level is likely to shrink U.N. membership as low-lying island states disappear.

How far might the sea level rise? Rob Young and Orrin Pilkey note in The Rising Sea that planning panels in Rhode Island and Miami assume a minimum rise of 3.5 feet by 2100. A California planning study uses a 4.6-foot rise by century’s end. The Dutch, for their coastal planning purposes, are assuming a 2.5-foot rise for 2050.

If the Greenland ice sheet, which is well over a mile thick in places, were to melt completely, sea level would rise 23 feet. And if the West Antarctic ice sheet were to break up entirely, sea level would rise 16 feet. Together, the melting of these two ice sheets, which scientists believe to be the most vulnerable, would raise sea level 39 feet. And this does not include thermal expansion as ocean water warms, an important contributor to sea level rise. A study published by the International Institute for Environment and Development has analyzed the effect of a 10-meter (33-foot) rise in sea level. The study begins by noting that 634 million people currently live along coasts at 10 meters or less above sea level, in what they call the Low Elevation Coastal Zone.

The country where rising seas threaten the most people is China, with 144 million potential climate refugees. India and Bangladesh are next, with 63 million and 62 million respectively. Viet Nam has 43 million vulnerable people, and Indonesia 42 million. Also in the top 10 are Japan with 30 million, Egypt with 26 million, and the United States with 23 million. Some of the refugees could simply retreat to higher ground within their own country. Others — facing extreme crowding in the interior regions of their homeland — would seek refuge elsewhere.

A second category of environmental refugees is also closely related to elevated global temperatures. A higher surface water temperature in the tropical oceans means there is more energy to drive tropical storm systems, which can lead to more-destructive storms. The combination of more-powerful storms and stronger storm surges can be devastating, as New Orleans discovered. The regions that are most at risk for more-powerful and destructive storms are Central America, the Caribbean, and both the Atlantic and Gulf coasts of the United States. In Asia, where hurricanes are called typhoons, it is East and Southeast Asia, including Japan, China, Taiwan, the Philippines, and Viet Nam, that are most vulnerable. The other region in danger is the Bay of Bengal, particularly Bangladesh.

In the fall of 1998, Hurricane Mitch — one of the most powerful storms ever to come out of the Atlantic, with winds approaching 200 miles per hour — hit the east coast of Central America. The storm left 11,000 dead. Thousands more were never found. The basic infrastructure — the roads and bridges in Honduras and Nicaragua — was largely destroyed. Then-President Flores of Honduras summed it up this way: “Overall, what was destroyed over several days took us 50 years to build.” The cost of the damage from this storm exceeded the annual gross domestic product of the two countries and set their economic development back by 20 years.

The first decade of this century has brought many other destructive storms. In 2004, Japan experienced a record 10 typhoons that collectively caused $10 billion worth of losses. The 2005 Atlantic hurricane season was the worst on record, bringing 15 hurricanes, including Katrina, and $115 billion in insured losses. Unless we can move quickly to stabilize the climate by reducing carbon emissions, we can look forward to more damage, displacement, and loss in the decades ahead as climate change brings more extreme weather and sea level rise accelerates.