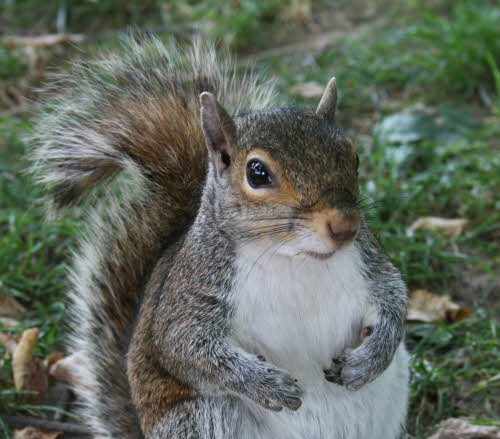 Or at least all of his minions do.

For every person that has or has had a bird feeder, I need not say more.

But still, I believe they are some of the most astounding beings on this planet.

And of course some of the most bloody frustrating!!!

With all of my (so-called) education and (supposed) ingenuity, with all of the technological and industrial/mechanical gadgets available to me, I am constantly thwarted by those little demons in gray fur. Just when I think a new ruse has succeeded in keeping their grubby little paws out of my bird seed, alas! They find a way to break the bank (and often break my feeder!)

Now, let me explain. Birds are probably my greatest joy. I can find no better virtual embodiment of the life-force itself. It seems that everything they do, from their songs to their hopping about, is purely an act of delight and self-expression. Birds pulled me up out of a serious, years-long period of depression; they also opened me up to the greater glories of nature, thus starting me on my path to environmentalism.

So when the squirrels come between me and my beloveds, I am pushed closer to breaking my vow of ahimsa (non-violence) than at any other point….

I know many other bird lovers, whatever their particular relationship with their feathered friends, share my frustration with these fuzzy felons from the flames of Hell. Just one of the many testaments to their nigh unconquerable deviousness is the endless variety of “squirrel-proof bird feeders” (probably the biggest oxymoron in the English language—right up there with a “Light Twinkie” and, if you really think about it, “Sustainable Development”). While capitalist CEOs may delight at yet another niche to cater to (and profit from), desperate birders fork out cash for these and many other anti-squirrel devices. But to no avail.

And so again and again, no matter what I do, the squirrels find some way to plunder my stores.

It is not so much that they eat all the food. In fact, they consume much less than many of the birds–blue jays, for example.

It is not so much the fact that they scare away all the birds as they sit on or in the feeders nibbling on a seed, chattering in gluttonous glee, and whipping their little tails in a show of satisfied victory. (Ah, they are some of the most vainglorious creatures on Earth. You can tell they are mocking you and laughing at you, singly and in a collective harmonious unison, as they sit there chit-chatting from tree limb to tree limb.)

So the squirrels are not only smart; they are both excellent teachers and excellent students as well. With their walnut-sized heads and peanut-sized brains, they somehow manage to outsmart us–the “rational,” “higher” beings that we (supposedly) are.

You know, we drool over the exotic animals we see on television nature shows, in zoos, in magazine articles and pictures, or in close encounters while camping. We gawk at intimidating landscapes and other marvels. We fight like mad to save endangered species and threatened habitats on the other side of the globe. We plan (or dream about) traveling to faraway paradises. We scale the highest peaks and plumb the deepest depths of the ocean. We even try to venture beyond our planet.

But how often do we fully appreciate the “familiar” and “common” natural wonders all around us?

The truth about squirrels, when I reflect on them, is that they serve as ever-present reminders that nature always has something to stir my spirits, fire my imagination, make me laugh, challenge my rational mind, and touch every fiber of my heart. Each one is like a little fuzzy scurrying metaphor, symbol, synecdoche….

Squirrels of the world, I salute you!

BUT STAY AWAY FROM MY BIRD FEEDERS!!!

Note: To all the other birders out there, I have figured out one “trick” that seems to work. I took a five-gallon bucket, drilled a hole through the bottom, and then hung it upside down on the pole for my feeders. So far, so good…. Obviously, hope does indeed lie eternal.

Image courtesy of Nikomargolies via Wikipedia.

Please share your squirrel stories–victories and defeats–along with other animal adventures!