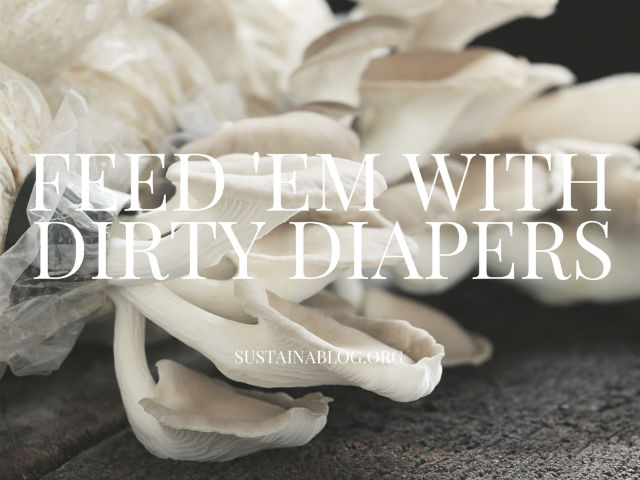 No doubt, you’ve heard of the concept of “mushroom management”: kept in the dark, and fed full of sh*t. That’s an old joke, but may also serve as the basis for a new means of handling disposable diaper waste. A team of researchers in Mexico – the world’s third largest consumer of those ever-so-convenient nappies – has experimented with the hypothesis that oyster mushrooms could break down the diapers much more quickly because the fungus feed on cellulose, and because non-organic compounds in the diapers retain liquids.

Led by Rosa María Espinosa Valdemar of the Autonomous Metropolitan University, Azcapotzalco, the team sterilized diapers containing only liquid waste, ground them up, and added lignin to create a substrate for growth. They then added commercially-prepared mushroom spores. Over a 2 1/2 – 3 month period, the mushrooms reduced the diapers’ weight and volume by about 80%. The resulting mushrooms are also – technically – edible, though the researchers don’t see this as a viable means of growing the fungus for human consumption.

Yep, if someone could scale this process to commercial viability, that would be very good news for the issue of disposable diaper waste. And while people may not want to eat the mushrooms, the could be used as a feed supplement for livestock. Finally, another possible benefit comes from the gel material used to retain moisture in the diapers: its remnants left over after the process has run its course could serve as a soil amendment to retain moisture in dry areas (like many parts of Mexico).

No doubt, there are a number of “yuck” factors here. As one commenter noted at LiveScience.com, this discomfort may well be a “first-world problem” in many senses… though if California and Australia maintain their levels of drought, gel remnant that holds moisture may sound like a pretty good solution for farmers there. I’d certainly guess that getting this whole process ramped up to commercial scale is the biggest challenge.

I’d love to hear your thoughts on any aspect of this novel waste-reduction strategy. Could the disposable diaper as a landfill filler be a thing of the past? If so, would that make them a more environmentally sound choice over cloth (with its need for repeated cleaning in hot water)? Let us know what you think.