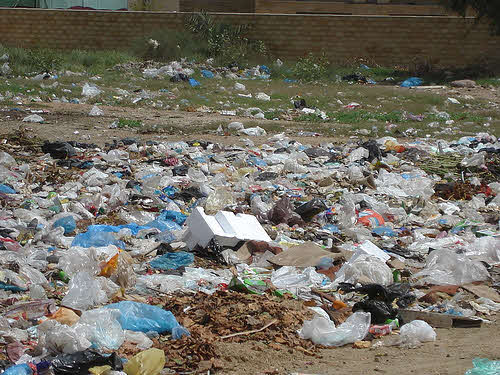 Worldwide, a trillion single-use plastic bags are used each year, nearly 2 million each minute. Usage varies widely among countries, from over 400 a year for many East Europeans, to just four a year for people in Denmark and Finland. Plastic shopping bags, made of depletable natural gas or petroleum resources, are often used only for a matter of minutes. Yet they last in the environment for hundreds of years, shredding into ever-smaller pieces but never fully breaking down.

Over the last century, plastic has taken over the planet. On the one hand, plastic seems a miracle material, with beneficial uses ranging from medical devices to making vehicles lighter and more fuel-efficient. On the other hand, it is a curse, allowing for the seemingly cheap mass production of disposable materials that fill up landfills, cloud the oceans, choke wildlife, and sully vistas. Filled with additives that lack a safety record, plastics have been linked with a slew of health concerns, including certain types of cancer and infertility. While plastics can be used and recycled wisely, the majority of those produced are neither. Perhaps no other item symbolizes the problems of our throwaway culture more than the single-use plastic bag.

Given the multitude of problems associated with plastic bags, many communities around the world have attempted to free themselves from their addictions by implementing bag bans or fees. The oldest existing bag tax is in Denmark. Passed in 1993, this regulation affected plastic bag makers who paid a tax based on the bag’s weight. Stores were allowed to pass the cost on to consumers either in bag charges or absorbed into the prices of other items. The initial effect of this system was an impressive 60 percent drop in plastic bag use.

One of the most well-known bag measures is Ireland’s national bag tax, adopted in 2002. It was the first to charge consumers directly, starting at a rate of 15 euro cents (20ȼ) per bag. Within five months of the measure’s introduction, bag usage fell by over 90 percent.  Litter was greatly reduced as well. Over the years, bag use started to creep up, however, so in 2007 the charge was increased to 22 euro cents, and in 2011 the law was amended with the aim of keeping annual bag use at or below 21 bags per person. Frank Convery of University College Dublin calls Ireland’s plastic bag levy “the most popular tax in Europe” and believes that it would be politically damaging to remove it.

Indeed, many communities looking at plastic bag reduction measures hope to emulate the Irish success. Other European countries where consumers pay for plastic shopping bags—either through law or voluntary initiatives—include Belgium, Bulgaria, France, Germany, Latvia, and the Netherlands. Throughout the European Union, member states will soon be required to take measures to reduce plastic bag use 80 percent by 2019. Reducing the amount of plastics in the marine environment has been a major driver of bag regulations in Europe and elsewhere. In a memo on its bag reduction proposal, the European Commission notes that “in the North Sea, the stomachs of 94 percent of all birds contain plastic. Plastic bags have been found in stomachs of several endangered marine species, such as green turtles, loggerhead turtles, leatherback turtles, black footed albatrosses, and harbour porpoises.” In sum, “at least 267 different species are known to have suffered from entanglement or ingestion of marine litter.” The desire to protect the whales that migrate off the coast of Tasmania led to Australia’s first local plastic bag ban in 2003. Now half of Australian states and territories ban plastic bags.

Beyond the seas, the reasons for taking action against plastic bags vary from malaria outbreaks associated with bags collecting water in Kenya to sewers clogged with plastic bags exacerbating flooding in Bangladesh, Cameroon, and the Philippines. Cattle choking on plastic bags gave impetus for bag regulations in Texas ranch country and in Indian communities concerned about the sacred cow. In the capital of Mauritania, an estimated 70 percent of cattle and sheep deaths are from plastic bag ingestion; in the United Arab Emirates, the concern is for camels.

The world’s strictest anti-plastic bag implementation strategy may be in Rwanda. Since a ban went into effect in 2008, airline passengers arriving from outside the country have recounted being forced to surrender plastic bags on arrival. It is unclear, however, how successful the ban is at reducing overall bag use, particularly in less urban areas, because of an active black market for plastic bags. In South Africa, where plastic bags caught in bushes and trees had become so common that they were called the national flower, a ban on the very thin non-biodegradable bags that tear readily and easily blow away went into effect in 2003. Thicker bags are taxed. Botswana’s plastic bag fee, which began in 2007, is credited with cutting bag use in half at major retailers. All told, at least 16 African countries have announced bans on certain types of plastic bags, to varying levels of effectiveness.

In China, where plastic bag pollution was widespread, a few cities and provinces tried to introduce policies to limit bag use in the 1990s, but poor enforcement led to limited success. Before Beijing hosted the 2008 Olympic Games, a national law went into effect banning extra thin bags and requiring stores to charge a fee for thicker bags. The Chinese government reported that bag use has dropped by more than two thirds, although compliance appears to be spotty. A number of cities in Southeast Asia, the source of many of the world’s plastic bag exports, have come up with legislation to reduce bag use.

In the United States, 133 city- or county-wide anti-plastic bag regulations have been passed. Bag bans cover one of every three Californians and virtually all Hawaiians. Chicago’s city council voted for a bag ban in April 2014.  Dallas and Washington, D.C., are among the handful of jurisdictions that charge 5–10ȼ for each plastic or paper bag; in both cities, charges were instituted to reduce the number of bags in local rivers. In Canada, much of the anti-bag action is voluntary, with a number of retailers participating. The provinces of Ontario and Quebec have each halved their plastic bag use through a variety of measures, including store incentives for using reusable bags and retailer-imposed fees. Liquor stores in Manitoba, Quebec, and Nova Scotia have tossed out the plastic bag for good.

Latin America also hosts a number of initiatives to reduce plastic bag litter and waste, including bans in the Chilean cities of Pucón and Punta Arenas and in the states of Buenos Aires and Mendoza in Argentina, to name a few. Carryout bags in a couple of Brazilian states are required to be biodegradable. São Paulo state banned free single-use plastic bags starting in January 2012, allowing heavy reusable or biodegradable bags to be sold for 10ȼ, but the measure was removed by an industry-supported court injunction, despite the backing of the supermarket trade association. Similarly, Mexico City banned plastic shopping bags in 2009, but, under pressure from plastics manufacturers, the measure was replaced before enforcement began with a recycling initiative—a common tactic used by industry groups around the world against stricter bans or fees.

Plastic bags clearly have a cost to society, one that is not yet fully paid. Reducing disposable bag use is one small part of the move from a throwaway economy to one based on the prudent use of resources, where materials are reused rather than designed for rapid obsolescence.

Additional information, including a timeline of the plastic bag and a collection of international plastic bag initiatives is available at www.earth-policy.org.