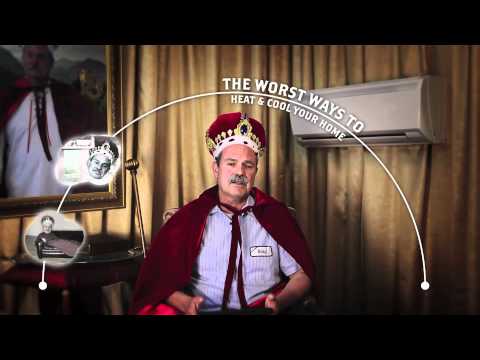 UPDATE (2/3/12): NEEA has wrapped up their Going Ductless campaign, and drawn a name for the cash prize. Ross Daniel of Seattle will no doubt have a good weekend, as he’s the winner of the $10,000 grand prize. He’s also a big fan of ductless heating systems, which we describe in more detail below…

It’s starting to get cooler out, especially at night, and your thoughts may be turning to the pleasures of Fall: colorful trees, sweaters, and hot mugs of cider. Of course, you may also be dwelling on some less pleasant thoughts… namely, what it’s going to cost to heat your home this Winter. I don’t know if the almanac’s predicting as brutal a winter as last year, but we’ll definitely be running the heating system… and paying for the fuel to do it.

The Northwest Energy Efficiency Alliance (NEEA) has picked this appropriate time to start promoting a technology that was new to me: the ductless heat pump. Their argument: this heating (and cooling) system is much more efficient and cost-effective than some of the decades-old technologies many of us still use, like baseboard and wall heaters. They’re having fun with their Going Ductless campaign by letting people know that “the 70s are calling, and they want their heater back,” giving users some graphic tools that allow you to place your picture in 7os-style settings, and sharing their “King of HVAC” videos (that’s one above). They’re even offering a $10,000 cash prize to Northwestern residents. They’re very serious about the technology, though, claiming that ductless heat pumps can save consumers 25 – 50 percent on heating bills when compared to older systems.

Still, I didn’t know much about these systems, so I started digging…

What is a ductless heat pump?

They seem like a good alternative for new construction, for replacing a ducted system (if you need to do that… I don’t know that the costs line up for optional replacement), or for replacing non-ducted systems. They run on electricity.

What makes these systems so efficient?

Finally, there may be incentives available for you to make the switch: NEEA has a list of Northwest-specific incentive programs, and the DSIRE database can help you in other US locations.

The US DOE notes that these systems can cost more per ton of cooling capacity: about 30% more than a central (ducted) system (but that doesn’t count the cost of ductwork), and twice as much as window units. That appears to only take into account upfront costs. DOE also notes that these systems must be properly sized and sited in order to achieve maximum efficiency and cost savings (but that strikes me as a qualification that applies to nearly any heating/cooling system). Finally, because this technology is still relatively new to the US, you may have trouble finding an installer (though, if you live in the Northwest, NEEA has a tool for locating qualified installation professionals).

As I said from the outset, this was a new one for me… if you know more about these systems, and their benefits (or downsides), share your knowledge with us in the comments.