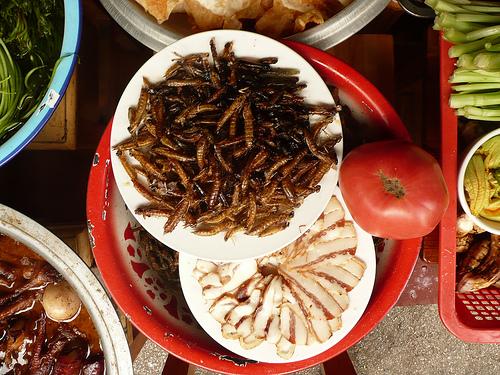 Editor’s note: This story’s really caught on around the green blogosphere… and it’s just coincidence that I also wrote about eating insects at SUNfiltered this week. Enjoy Lior Levin’s take on the subject… he works with a couple of Internet start-ups such as Producteev, a task management company in New York, and a nursing wear company called Milk Nursingwear.

I like many others enjoy a great barbecued steak but also respect the choices of all those vegetarians out there. Don’t get me wrong: I enjoy my veggies too, but I have to say that half of my dinner plate is usually composed of meat of any kind. Lately though I have begun to take on a new lifestyle of thinking about living healthier and greener.

I have finally begun to take notice that the earth is in trouble and I should be doing my part to contribute to a greener earth. So there you have it: a new healthy eating lifestyle and a more environmentally conscious me! But….little did I realize that these two major lifestyle changes of mine have many important factors in common. Let me explain.

I had no idea of the impact that meat consumption had on the earth. I just figured it was no big deal to just grow more livestock as it was being depleted. After all isn’t this keeping the farmers in business? So it should be good for everyone, people are being employed and I’m getting my meat. Time for a wake up call.

I discovered, though, that in order to supply the world’s demand for meat it takes about two thirds of the world’s farming land to do this. Then that same demand creates about 18% of the greenhouse gasses that are responsible for global warming. Whoa! So much for my contribution to a greener earth.

So am I just getting a bit paranoid here or is there room for real concern? Well as it turns out the United Nations foresees the current and future danger that is occurring from this situation and is looking at alternatives. You may not like what they are thinking though.

Bugs! That’s right, the future could mean that when you go into a restaurant instead of seeing roast rack of lamb, porterhouse steak, or barbecued chicken, you will get to order deep fried scorpions, breaded crickets and for dessert chocolate coated grasshoppers.

For those that live in the Western world this may seem horrifying, but for the rest of the world in many places it is already a reality. Before you turn your nose up at it though, there are many advantages to eating insects aside from easing the meat crisis of the world. Many insects are rich in the many nutrients that our health demands, such as proteins and minerals. Don’t worry, there won’t be any shortage of items on the menu either because there may be over a thousand varieties of insects to choose from.

The breeding and harvesting of insects for food could drastically reduce the greenhouse gases compared to the raising of livestock. We are looking at a reduction here of methane which is an issue with livestock, as well as less production of ammonia which is the concerns of sheep and poultry farmers, it also factors in nitrous oxide. These are all global warming culprits.

There may be several other benefits to becoming “insect lovers” as opposed to “meat lovers” in respect to cuisine. Some say it could create damage control for our forests by reducing some of the damage caused by some insects, as the wild insects would be captured for breeding. Then those who make their living from farming could convert to insect farming.

So as much as we in the western world may turn our noses up at this concept, perhaps we had better take a look at the rest of the world and adapt some of their attitudes about food before we end up starving ourselves.

If you are finding comfort in thinking that because people, like me, are adapting more healthy eating lifestyles and are reducing their meat consumption, then you better look at the figures. It has been reported that in the last twenty years consumption has increased from 20kg to 50kg and in another 20 years it will be up to 80kg.

If you think that maybe this is all just fiction then stick around until the year 2013 where plans are being made to hold a world congress concerning changing the cuisine of the world.

Image credit: malias at Flickr under a Creative Commons license