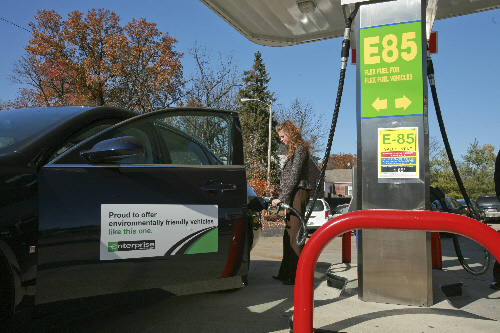 Last September, when discussing a new tool for vehicle fleet managers to determine the environmental impact of purchases, I made a quick reference to efforts by the rental car industry to “green” their fleets. At the time, I’d seen a number of press releases touting these efforts, particularly commitments to purchasing vehicles that produced lower levels of emissions. I remember thinking that I should reach out to St. Louis-based Enterprise Rent-a-Car to find out more about their efforts; unfortunately, thinking was as far as I got.

I got the chance to rectify that situation when I met with Pat Farrell, Enterprise’s VP of Corporate Responsibility and Communications, and Christine Conrad, VP of Public Relations, two weeks ago over lunch. While the focus of our discussion was the company’s new offering of carbon offsets (in partnership with Terrapass) to customers renting by phone or through the company’s website, Pat and Christine also wanted to discuss the range of environmental initiatives Enterprise had taken in recent years. These have included:

Greening its fleet: The company (which also includes National and Alamo) now owns 73,000 flex-fuel vehicles, and 4000 hybrids. Over 237,000 of its 1.1 million vehicles average at least 32 miles per gallon, and 264,000 have earned EPA Smartway certification.

Contributing to Biofuels Research: Last year, the Taylor Family, which owns the company, donated $25 million to create the Institute for Renewable Fuels at the Donald Danforth Plant Science Center.

Conservation Efforts: Enterprise’s charitable foundation has committed to plant 50 million trees over the next fifty years in partnership with the Arbor Day Foundation (though will not use these trees for offset credits).

All of these efforts are impressive, of course, and show a commitment by the company, and the Taylor family, to lightening its footprint: Pat told me that the green initiatives sprang from reflection that arose in anticipation of the company’s 50th anniversary last year. CEO Andy Taylor saw that milestone as an opportunity to not only celebrate Enterprise’s success, but to also consider its impact on the communities in which it operated, and the natural environment. As Pat told me, Taylor wanted to “say ‘thank you’ for the first fifty years by making commitments for the next fifty years.”

Of course, I still had questions. Enterprise puts hundreds of thousands of cars on the road each day, and that adds up in terms of emissions. Also, flex fuel vehicles are a good first step forward, but only if E85 is actually available. On the first point, Pat was quite candid: the company is in the personal transportation business, and plans to stay there. But, it also wants to survive financially for another fifty years, and lightening the environmental impact of its fleet and operations made sense for both environmental and financial sustainability. As Inc. magazine noted last Fall in its profile of Enterprise’s green initiatives,

For Enterprise to thrive, it needs cars on the road — lots of them. It also needs lots of fuel, readily available and at affordable prices. And most of all, it needs the act of driving a car itself to remain noncontroversial and socially acceptable. In a car culture like ours, it’s hard to imagine that driving could become outré. But there’s precedent for massive and unexpected social and economic shifts that upend entire industries. (Cigarette, anyone?)

The question of flex fuel vehicles is also complex: Pat readily admitted that, despite the size of the flex fuel fleet, probably only 2000 vehicles at any time were actually running on E85. Availability of fuel is the problem, so, as Christine noted, the company has worked with fueling stations around Enterprise locations to make E85 available: one such location was in St. Louis suburb Kirkwood. The company has actually created E85/Flex Fuel branches where about 40 of the vehicles are available, and employees provide renters with information on locations of E85 pumps. The first of these branches opened in Charlotte, North Carolina, in December. The point, Pat noted, is not to necessarily embrace flex fuel vehicles, though; it’s to support available cleaner technology by purchasing such vehicles. Furthermore, he noted “We’re not claiming a great victory here; we’re claiming that what we bring to the table is a fleet that’s always changing in response to technological developments.”

In part 2, I’ll get more into the details of the offset program, the thinking that pushed Enterprise in that direction, and the challenges presented by asking customers to pay a little more to clean up the emissions produced by company vehicles. For more information on alternative fuels and cleaner vehicles, stop by Gas 2.0.